[At Home with Her Excellency, Indonesia] Bringing Indonesia’s ‘chic side’ to Seoul

[At Home with Her Excellency, Indonesia] Bringing Indonesia’s ‘chic side’ to Seoul 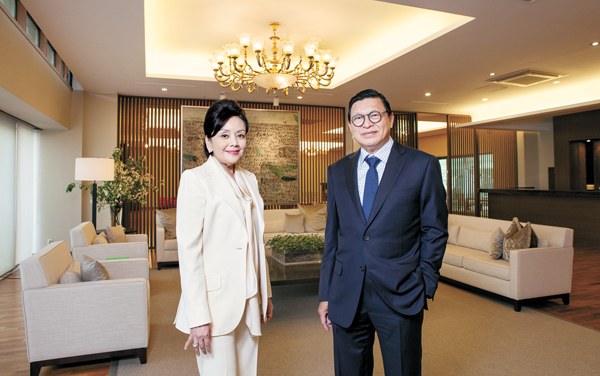 Indonesian Ambassador to Korea John Prasetio and his wife, Alexandra Prasetio, pose in their living room during a residence tour last month in Yeouido-dong, western Seoul. The house was entirely renovated by the couple in time for their arrival here in 2012, to fit what Mrs. Prasetio calls “Indonesia today.” [PARK SANG-MOON]

Upon hearing that her husband would serve as the new Indonesian ambassador to Korea in 2012, Alexandra Prasetio, founder and chair of an architectural design company in Jakarta, couldn’t help but wonder what their new house would look like.

What she found when they arrived was a 35-year-old residence in need of a “face-lift.” Mrs. Prasetio said she wanted to create an environment reflecting what she likes to call “Indonesia today.”

The idea was finally realized after consulting with her husband and deciding to renovate the interior over a four-month process, working together with capable local contractors to meet the deadline.

Nestled in a bustling area of Yeouido-dong, western Seoul, the residence has been featured on numerous occasions in local design magazines, which have praised it for capturing the best of what Indonesia has to offer today.

A. It was built in 1977 under the command of Indonesia’s first ambassador to Korea, Sarwo Edhie Wibowo, who happens to be the father-in-law of former Indonesian President Susilo Bambang Yudhoyono. At the time, I heard the Korean government wished to build a diplomatic town in Yeouido-dong, and suggested foreign diplomatic missions purchase the land, offering lower-than-usual prices.

However, because the area was undeveloped back then, the Indonesian Embassy was the only embassy to follow through. Considering the current land value of Yeouido, it was indeed a wise decision made by our first ambassador. Among all the ambassadors’ residences in Seoul, we’re the closest to the National Assembly, with neighbors being Ankara Park, public broadcasting station KBS and the Daewoo Trump World apartment complex, among others.

How did your renovations go?

We began renovating the house in October 2012; it took us a month to make a blueprint and three months to put those plans into practice, but the structure remained.

The main concept was to show “Indonesia today.” One way was by highlighting the artwork we were planning to exhibit inside our home. To achieve that goal, I focused on lightening up the colors of the furniture by implementing monochromatic and neutral colors like cream, light gray and beige. When my husband’s term ends in Seoul, we plan to leave most of the furniture in the public area - the first floor - as the way it is right now.

The residence is 1,328 square meters (14,294 square feet) in total. On the first floor, used as a public area, there’s a formal reception and multifunctional hall, a living room, a dining room, a kitchen and what we call a “Garden Room.”

The second floor is our private quarters, which includes our bedroom, a living room, a study room, a dining room and a kitchen. Outside, there is also a large garden and a tennis court.

I assume all the artworks here are owned by your state government?

The artwork is our personal collection. My passion for art goes way back since I was a little child when my mother used to take me to art museums and encouraged me to appreciate the beauty of all kinds of objects.

Among the collection of art in our home, my husband and I are particularly fond of “Sonic Rotating Geometry Type F - Brass Plated #31” (2014) by world-renowned Korean artist Haegue Yang. She managed to put together a myriad of bells in this kinetic piece, allowing it to rotate like a wheel when I push a corner. It radiates a very attractive kind of positive energy, and through this, I can relate to her philosophy in life and the nature of human beings, that we’re not alone and can reach out to connect with others.

Another favorite is “When I Freefall to Reach Home” (2012), an oil painting by Indonesian artist Christine Ay Tjoe. She was pregnant while working on this piece. Compared to her earlier works, this piece feature brighter colors, resembling the happy mood she was during that time.

In May 2015, I was involved in collaborating the first solo exhibition of the Indonesian artist with SongEun ArtSpace in Gangnam District, southern Seoul, which ran for almost three months under the title “Christine Ay Tjoe : Perfect Imperfection.”

SongEun ArtSpace is currently hosting its second Indonesian art collection, and the show will run through next month. In October, a third exhibition will be featured. I’m deeply proud that I was able to collaborate with SongEun ArtSpace, one of two highlights of my stay in Korea.

When people think of Indonesia, they tend to see only the traditional aspects, the old and conventional. One of my missions as the ambassador’s wife is to introduce the Korean public to contemporary Indonesia, a new, chic side that widely characterizes what my home country has evolved into this day. Visitors to our residence can spot some highlights at a number of corners, like the contemporary paintings and sculpture, as well as Balinese woodcarvings and statues depicting gods, heroes and demons.

You’ve mentioned two “highlights” in Korea. What’s the other one?

I was privileged to teach two semesters at Sookmyung Women’s University in Yongsan District, central Seoul, on Indonesia, focusing on global leadership and multiculturalism.

Since 2013, the course has invited ambassadors’ spouses to educate some 50 young women about their native countries, and I was so honored to be able to share my experience and knowledge with them, all truly amazing individuals: intelligent, capable, gentle and kind.

I noticed an unusual plant growing on your dining room table.

Yikki (moss)! I love yikki! They’re centerpieces of my large dining room table, and the whole idea behind this is my philosophy of bringing the garden into the house. To create that ambience of having a peaceful garden in the room, we made acrylic boxes and planted yikki inside. My Indonesian friends are delightfully surprised when they see it.

When you’re in Seoul, how do you spend your personal time?

I love visiting exhibitions, museums and flower markets. I also enjoy doing flower arrangements and creating new menu items with our chef. We host many events at the residence, so it’s important that our Indonesian guests try a taste of Korean food.

From left: The couple’s favorite spot in the house, the “Garden Room,” is often used to host small groups of visitors; Mrs. Prasetio says she finds great joy in “bringing the garden into the house,” which includes planting moss on her dining table; comprised of small bells, this kinetic square-shaped art piece, “Sonic Rotating Geometry Type F - Brass Plated #31” (2014) by Korean artist Haegue Yang, makes a jingling sound when pushed from a corner; a Balinese woodcarving from the couple’s collection of traditional Indonesian pieces, inspired by Bali’s myths and legends, adorns the Garden Room. [PARK SANG-MOON]