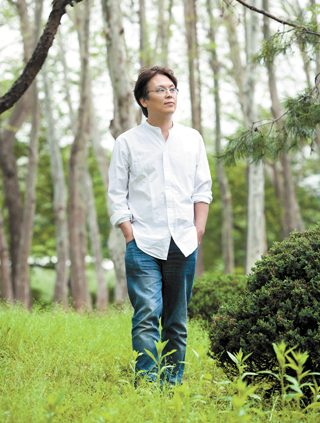 Director Min Byung-hun of the recently released film “I’m Feng” says he is going to directly distribute the film to audiences because the current Korean film industry is skewed toward mainstream movies. [JOONGANG SUNDAY]

Korean filmmaker Min Byung-hun is a man with beliefs.

He has a number of principles that he firmly relies on when setting the course for his career, and he thinks those beliefs will bring about better results.

But as many people know, staying true to what you believe in isn’t always as easy as it sounds. Many people, when they encounter obstacles, take a step back or find another way around. Compromising is always an easier option.

However, the story plays out differently for Min.

When he confronted hardships while making and distributing films, Min decided to pave a new road for himself. And now, Min has been walking on that road for quite some time. He always believed that one day, others would notice his good will and start to follow.

A few of his principled efforts include a slew of environmental movies that are easily neglected by major film distributors and cinema chains.


In addition, Min has been making a series of short films and documentaries that shed light on artists, which again aren’t always widely popular.

The latest in the so-called artist series is the recently released film “I’m Feng,” which tells the story of Chinese modern artist Feng Zhengjie. It opened on Thursday.

Categorized as a gallery film, the 66-minute video wouldn’t seem out of place being screened at an art exhibition alongside Feng’s works. The characters, including Feng, rarely speak, and the plotline is ambiguously laid out.

Of course, such a movie is not preferred by large multiplexes, which are constantly criticized for their excessive screening of big-budget commercial films. Such an unfavorable situation happens constantly, every time there is a new big-budget film on the market; the most recent case was when “Captain America: Civil War” monopolized 1,900 screens across the country, even though there are only a little more than 2,000 in total.

As an alternative, Min decided to directly distribute the movie, providing an online link to the film to those who request it by email and pay a small fee.

At select theaters, the film will be screened only in the form of a forum, where art experts and critics come up on stage after the movie finishes to explain and discuss the film’s artistic value.

“Presenting this movie in the current Korean movie market is a suicidal act,” the director said at a recent press screening, which took place at the Literature House located at the foot of Mount Namsan, a rare spot to hold such an event. “It is like digging your own grave.”

The director explained that trying to distribute the film in the current environment was “ degrading the dignity of this work.”

“I will not be confined by its problematic distribution system,” he said.

It was a brave but frankly reckless move, one that would not be possible to carry out without firm conviction.

To hear more candidly about what he is ultimately trying to achieve through his films and the way his films are being distributed, the JoongAng Sunday, an affiliate of the Korea JoongAng Daily, met him in a serene neighborhood near the Yangjae Stream in southern Seoul last month, a day after the press screening.

Here are edited excerpts from the interview. 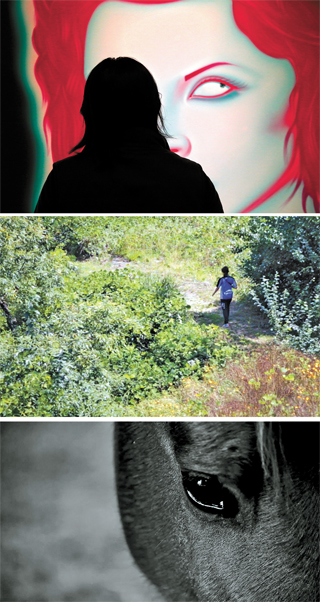 Q. Yesterday was the first presentation of the movie to the press. How do you feel?

A. I did it in an unusual way by not holding it at a big multiplex but at a small hall in the Literature House, which I am really satisfied with. It had its own garden and had a laid-back ambience which was just the right place to enjoy a gallery film. I am currently working on the making-of version of the movie and am in the postproduction process for the film “Emperor,” which is about the pianist Kim Sun-wook. Oh, and I am also working on a trilogy that revolves around the theme of love and broken hearts.

Isn’t that a little too much to handle at one time? You also submitted a documentary called “Coexisting with Sihwa Lake” to the recently finished Green Film Festival in Seoul. I heard you were the first director to submit a piece to the festival for four consecutive years.

Each film deals with a different issue and style, which makes it possible for me to work on many projects at the same time. Making a feature-length film is actually an extremely nerve-wracking process. You have to cast actors, attract investors and so on. If something goes wrong during the process, my soul gets scratched, which eventually damages my work.

I need to be fueled, too. My soul needs to be cared for. Some directors do this by traveling, but for me, I am fueled by making more films. I make short films to recharge myself and heal. It also helps to not lose my sense for filmmaking.

Does making short films require painting a big picture like a feature-length one? You made a trilogy on fear (“Flight of the Bee,” “Let’s Not Cry” and “Pruning the Grapevine”) and another trilogy on life (“Touch,” “Love Never Fails” and “Planner.”)

Of course. The most important, penetrating theme in my works is life. I believe a movie should act as an oxygen tank for an era. But it shouldn’t be consumed thoughtlessly and stop at being a one-time source of entertainment. In order to do that, I believe a film should talk about subjects that are needed in modern society.

For example, if fear was my biggest interest in the past when making films - because that was my pervasive emotion during my 20s - right now, I believe love and pain are what need to be thought over. These days, people all have a thirst for love, and they don’t know how to heal themselves.

Then what is the penetrating theme in your environmental movies?

It is “let it be.” We need to let it be. No digging, no cutting and no touching. For Sihwa Lake, people wouldn’t need to restore it if they had not blocked the seawater flowing in to it.

Can you talk about your in-depth interest in art, as shown in your artist series?

I was always interested in art. When I was studying film in Russia, my second major was aesthetics. I also get most of my inspiration from paintings, literature and music.

I was looking at an artwork at a gallery one day and wondered why I was just enjoying this piece by just looking at it. I was a filmmaker, but I was just playing around with artists. You get much more inspired and impressed once you see the backstory or behind the scenes of an art piece or a performance. That is why I decided to film it.

Why did you pick Feng Zhengjie as your inspiration in “I’m Feng”?

I have always liked his work. But the selection wasn’t completely out of the blue. I have been filming movies about artists including Paek Young-su, Kim Nam-pyo and so on. The whole process led me to work with Feng, on what is probably my 10th series dedicated to artists.

So since you’ve done so much with artists, you are now turning your attention toward musicians. Is that right?

Probably, yes. I shouldn’t be obsessed with one thing too much. I need to expand my spectrum. The protagonist of the film “Emperor” may be pianist Kim Sun-wook, but it is also a film that reinterprets Beethoven. I filmed it for about a year, and it is now in postproduction. I listen to its music a lot, and I think it has a different sort of energy than that of paintings.

When you released “Love Never Fails” in 2015, you criticized the screen monopoly in the Korean movie industry and announced that you would stop making films in Korea. Is that still in effect?

Yes, because the structure of Korean cinema, where one film takes up 1,800 screens when there are only 2,300 of them, doesn’t seem to be changing any time soon. I am not a revolutionary or a fighter. I am a filmmaker. So I want to keep making films, not complaining. I thought it was more meaningful to pave my own way toward appealing to the audience, instead of fighting it and being overwhelmed.

So “I’m Feng” won’t be shown in theaters?

If the theater requests it, we are going to screen it. But only if we can hold a guest visit session afterward where a curator can explain the movie, just like there is a docent at a gallery. I made this movie like an art piece, so we need someone to guide us through. I always think the audience is not at fault. We have to give them the right to see films they want.

If there is a single viewer that wishes to see this movie, I am going to send the file myself. If there is a group of viewers wanting to see this film, for example, in Busan or Gwangju, I am going to go there and watch the film together and talk about it afterward. There is a problem in the distribution system, so I am throwing myself into the field.