In an age of pocket-sized computing technology, personal computers (PCs) are getting thinner and lighter to compete, and the results are astounding.

Chinese smartphone maker Huawei has announced its entry into the PC market with the Huawei MateBook, a computer that only weighs 640 grams (1.4 pounds) and is just 6.9 millimeters (0.3 inches) thick but comes equipped with a 12-inch multi-touch screen and top-notch tech such as finger-scan functions.

“We lightened the weight by making our product with high-quality aluminum,” a Huawei spokesman said, “and maximized its portability by taking a ‘two-in-one’ form, offering a detachable keyboard and tablet screen.”

PCs are in for a tight diet plan, as demand for lighter and more portable PCs has forced computer makers to come up with new forms and materials in their designs - and spearheading this new diet trend are so-called mini-PCs.

Much smaller than past versions, they are not only small but also equipped with unique functions. For instance, Taiwanese computer maker PiPO recently released the KB2, a folding-keyboard mini-PC that functions as a PC once the keyboard is connected to a television screen or monitor. Another mini-PC, Acer’s “Revo Build,” allows users to assemble the product like they would Lego bricks, adding block-type audio parts, hard disks and portable batteries. 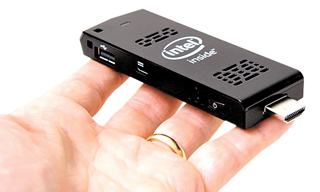 These mini-PCs’ unique designs are breaking down the fixed idea that a desktop computer is something big and heavy. Chinese device maker MeeGoPad launched the T04, a mini-computer that takes the appearance of a round pebble. Another PC maker, Endless, has created a grapefruit-sized mini-computer dubbed Endless Mini, which is also quite aesthetically appealing.

Technology giants Intel, Google, Microsoft and Epson have consecutively showcased a stick-type PC about the size of a human finger, like a USB stick, which consumers can carry around in their pockets and then use whenever and wherever they want, provided they have access to a TV or monitor with a USB port.

Mini-PCs are becoming popular largely due to their high utility. In a conference room or public space where there are screens, people can easily share content through a beam projector or monitors.

Even in living rooms, a TV can now be turned into a PC. It takes up less room than a desktop computer, and there is no need to clean up all the tangled cables attached to the computer. 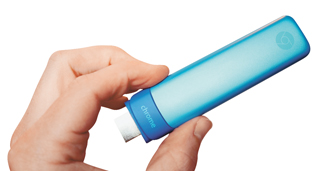 Laptops, too, are becoming lighter and slimmer. LG Electronics introduced its Gram 15, a 15.6-inch large-screen notebook that weighs only 980 grams, which is the lightest among all competing products with the same-size screen. It is in fact the first time a laptop with a 15-inch screen or larger has been developed that weighs less than a kilogram. Gram 15’s weight is equivalent to only two cups of grande-sized coffees. Samsung Electronics’ 13.3-inch Notebook 9, and Microsoft’s 13.5-inch two-in-one Surface Book also weigh less than a kilogram.

These thinner and lighter PCs have been made possible through a series of technological developments. Batteries have become lighter but denser, which means they provide the same energy but are now smaller. New materials like aluminum, and sometimes even magnesium alloy, commonly used to make motor racing cars, are now being used to make PCs. Sound and networking functions that used to require separate devices are now installed in keyboards.

“The global PC market is declining, but demand for mini-PCs and super-slim laptops is continuously growing,” said Seo Man-seok, a marketing chief of Zotac Korea, a mini-computer and accessories provider. “Major PC manufacturers are expected to focus on developing more portable and high-tech mini-computers.”