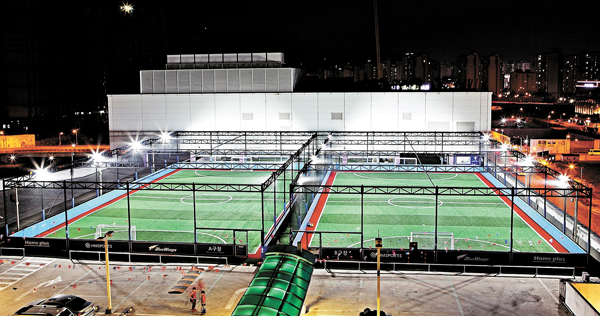 The Seosuwon branch of Homeplus in Suwon, Gyeonggi, features a sports arena for customers and people living in the area. [HOMEPLUS]

Overly fierce competition among big supermarket chains have eroded profits. So they are now focused on offering novel services outside the supermarket realm in a bid to attract more customers and perk up stagnant revenues.

Lotte Mart is targeting users of its gas station and offering pick-up services for purchases made online or through mobile devices.

It is assuring customers that their advance purchases will be delivered straight to the trunks of their cars as they fill up their cars with gas.

The retailer devised the idea to increase convenience and save time for customers who often use Lotte Mart’s gas stations after shopping in their supermarkets.

According to the chain, 30 percent of customers at Lotte Mart visit the gas station after shopping.

The service was first offered at the Lotte Mart in Yongin, Gyeonggi, last week and will expand to six more stores that have gas stations.

The service is an extension of the retailer’s drive-and-pick-up service, in which online and mobile buyers can pick up orders at nearby Lotte Mart branches instead of waiting for deliveries through the mail or couriers.

Rival Homeplus, the second-largest chain, is using the huge rooftop of a store and converting it into a sports stadium where customers can play football or jog on an outdoor track.

The Seosuwon branch of Homeplus in Suwon, Gyeonggi, opened a big rooftop sports arena last week with two outdoor and two indoor stadiums for futsal, a modified form of football.

Homeplus said that the HM Futsal Park is aimed at both entertaining customers and easing the shortage of sports facilities in the neighborhood.

“The futsal stadium is taking advantage of the retail chain’s untapped location and great accessibility,” said Lee Dong-joon, a team leader at Homeplus. “It can attract more visitors while contributing to the local community. We will try out different attempts beyond traditional services to entertain our customers.”

Homeplus said it will invite youth football club players to practice at the facility. Surrounding the stadium is a grass track where families of the players and residents of the neighborhood can enjoy exercising.

The arena will operate at night with LED lights installed.

The opening of the sporting facilities is in line with efforts by Homeplus to deliver refined shopping experiences through entertainment and cultural programs.

At the newly opened Songdo store in Incheon, Homeplus devoted over 60 percent of the store to a culture center where customers can sign up for classes and lessons.

“Since it is hard to stand out through low prices alone, we are focused on delivering fun experiences that people can’t find in other places,” a representative of Homeplus said.

The emphasis on entertainment and culture is the latest trend in the retail industry.

In the city of Hanam in Gyeonggi, Shinsegae is building a shopping mall with a movie theater, theme park and designer-brand stores that will open in late 2016.

Similar malls will be built in the city of Goyang in Gyeonggi and Cheongna International City in Incheon. Retail powerhouse Shinsegae has high hopes for their all-inclusive entertainment and shopping destinations.