Korean films have a good showing at Cannes

Korean films have a good showing at Cannes 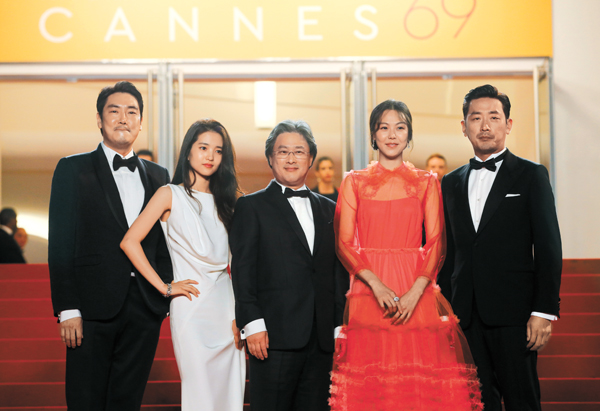 Korean-made films are off to a good start at the ongoing Cannes Film Festival.

Elena Pollacchi, the executive programmer for the Venice International Film Festival, said she was most excited to see Park’s latest at Cannes. She said the film surprised her with its extremeness, adding that she is looking forward to inviting it to the Venice festival as well.

Buyers who attend film events to find qualified titles to bring back to their home countries also showed positive responses to “The Handmaiden.”

An official from the Poland-based film company Gutek Film described the thriller as a “masterpiece,” adding that it is more than qualified to receive the Palme d’Or, the top prize at the prestigious film festival.

Another official from the Berlin-based distributor Koch Media said the film captures the quintessential joy of watching films. Its “mise-en-scene” is another protagonist of the film, the official added.

Positive reviews from foreign media are popping across the Internet.

London-based daily newspaper The Guardian gave the film four stars out of five, crediting the film’s focus on female sexuality.

“The rare focus on a woman’s experience of sex without a man involved is key in [Park’s] adaptation,” the review said, adding that the “impotency of male characters” helps counter some criticism of the film’s over-the-top nudity and sexual scenes. The film is ultimately a “hugely entertaining thriller.”

Still cuts from “The Handmaiden,” left, and “Train to Busan,” which were invited to the Cannes Film Festival’s “In Competition” and “Midnight Screenings” sections, respectively. After their world premieres, both titles received rave reviews from foreign media. [CJ ENTERTAINMENT, NEXT ENTERTAINMENT WORLD]

Variety, a major American entertainment magazine, also pointed out some strong points of the film, including its aesthetics.

“Commercial and arthouse audiences alike will either thrill to its stylized potboiler elements or swoon over the opiate influence of Park’s signature aesthetic beauty,” the review said. “Production values are sensational even by Korean cinema’s blue-chip standards.”

The Hollywood Reporter, another major entertainment magazine based in Los Angeles, expressed full-fledged satisfaction with the film, starting its review with the line: “Expectations are fully met in Park Chan-wook’s exquisitely filmed ‘The Handmaiden’.”

While such admiring reactions by film reviewers of Park, a frequent feature at Cannes, were somewhat expected, what was surprising were the equally overwhelming responses toward another domestic title, “Train to Busan.” This disaster film, directed by Yeon Sang-ho, was invited to the festival’s noncompetitive “Midnight Screenings” section.

The film, which had its world premiere in the southern French city on Friday night, also drew explosive responses from the audience, who gave it multiple standing ovations.

Thierry Fremaux, director of the festival, described it as “the best midnight screening ever.”

“Mr. Yeon must be in competition next time,” he added.

With the two Korean films earning above-average reviews, the baton has been handed over to the buyers, who will ultimately determine the market value of the films.

While “The Handmaiden” already pre-sold its publication rights in 116 countries at the European Film Market, CJ Entertainment is looking forward to signing more contracts in wake of the positive responses at Cannes.

“Train to Busan,” which wasn’t able to induce much interest from foreign buyers beforehand due to a lack of familiarity with director Yeon in the international film scene, the screening at Cannes is expected to completely turn the tables. According to local media reports, all 72 attendees at the film’s market screening inquired about purchasing its publication rights with Next Entertainment World, the domestic distributor.

Meanwhile, “The Wailing,” the third Korean feature invited to this year’s festival, will have its debut there on Wednesday. It already opened in Korea last Wednesday and is topping the local box-office ranks.

“The Handmaiden” opens nationwide June 1, while “Train to Busan” will have its domestic release in July.

Whether “The Handmaiden,” the only Korean feature in competition at the festival, will nab the prestigious Palme d’Or or any other award will be decided on Sunday.