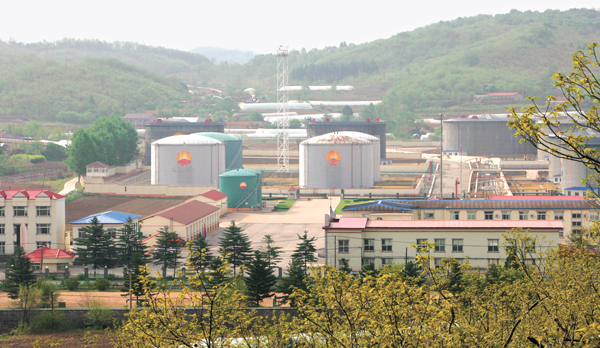 An oil storage and pipeline facility is located in the Chinese border town of Dandong, Liaoning Province, from which crude oil from China is sent into North Korea through a 30.3-kilometer (18.8-mile) pipeline across the border. [SHIN JIN-HO]

DANDONG, China - While the Chinese government claims in official trade figures that it no longer exports oil to North Korea, a JoongAng Ilbo reporter visited a pipeline facility located in the outskirts of the border city of Dandong and witnessed crude oil being loaded into the pipeline for transport across the border.

Located on the China-North Korea border along the Yalu River, this facility is where crude oil goes through a last inspection before being transported across the river.

When the reporter visited the pipeline facility, crude oil was being loaded into the pipeline from oil tankers. The crude oil, which comes from the Daqing Oil Field - the biggest oil field in China located in Heilongjiang Province - was transported there by train and would be piped to a storage facility in Baekma, North Pyongan Province, from which it will be distributed among state agencies, military bases and transport-related factories in the energy-hungry country.

One Chinese man who runs a convenience store in front of the pipeline facility told the reporter that oil has been exported to North Korea since the time of Mao Zedong. A vendor selling food from a street stall said trains carrying crude oil arrive at the facility every day. When asked how frequently trains arrive at the facility, the seller said, “Usually once a day but sometimes twice at most. In the past, it was much more frequent.” The vendor said there were more trains about 20 to 30 years ago.

A Chinese man in his 70s who runs a small snack shop adjacent to the facility said, “How can we stop giving oil [to the North] as an ally? Humanitarian aid should be continued regardless of sanctions.”

After North Korea in 2013 conducted its third nuclear test, catching China off guard, Beijing has stated it has exported no crude oil to its longtime Communist ally, as shown by its official customs records since January 2014. But there is evidence China still exports at least some crude oil to the North.

“China hides its oil exports to North Korea from its official records because it is just not comfortable [saying it officially],” said a source familiar with China-North Korea trade, who requested anonymity.

“Since the second half of Hu Jintao’s rule [in 2008-13], China has been applying the North with the least amount of crude oil intermittently so that the pipeline would not get clogged,” the source added.

After Pyongyang carried out its fourth nuclear test in January, the United States has pushed China for a complete halt in oil exports to its neighbor. China rejected the demand, insisting the “livelihoods” of ordinary North Koreans should not be affected. Instead, it agreed to stop aircraft fuel to the North.

But since then North Korea has been scrabbling to find an alternative sources of oil. One expert on North Korea affairs in Dandong told the JoongAng Ilbo that a large quantity of oil from Russia had been sent into the North.

“Despite international sanctions, North Korea will have no trouble acquiring oil as long as it has cash to pay. But there are many North Koreans complaining over the low quality of oil being imported,” the source said.

“The visit by Kim Yong-chol, the director of the United Front Department, to Russia in late February, before the passage of the UN resolutions to punish the North [for its fourth nuclear test], must have been related to securing oil imports from Russia,” the source added.