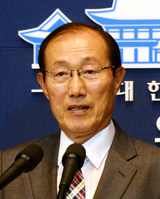 President Park Geun-hye has appointed Lee Won-jong, former head of the Presidential Committee on Regional Development, as her new chief of staff, replacing a former aide who resigned yesterday after the Saenuri Party’s overwhelming defeat in the general election.

Kim Sung-woo, senior presidential secretary for public affairs, announced the latest reshuffle on Sunday, saying Lee, 74, was considered the right person to assist the president at a time of urgent need in national development and communication.

Saenuri lawmaker Kang Seog-hoon, 52, was also named over the weekend as the new chief economic affairs adviser. He will replace An Chong-bum, 57, who will become the new senior secretary for policy coordination, replacing Hyun Jung-taik.

Kang and An, both graduates of the Wisconsin School of Business at the University of Wisconsin-Madison, have held key economic roles in Park’s administration and are expected to focus on adding momentum to the controversial labor reforms, which the government has long backed but is facing opposition from other parties.

Kang, a former lawmaker for the Seocho B District of southern Seoul, previously taught economics at Sungshin Women’s University in Seongbuk District, northern Seoul, and was the deputy chairman of Saenuri Party’s policy committee.

In explaining why Kang was chosen, Kim hailed his deep knowledge of economic policies and theory.

An, a former economics professor at Sungkyunkwan University in Jongno District, central Seoul, also served as deputy chairman of Saenuri Party’s policy committee and was elected as a proportional representative in the former National Assembly.

Kim said An was the “brightest” on economic policies and government operations and he will hopefully bring efficiency to current systems.

Comments on the new chief of staff were mostly mediocre. Kim Chong-in, head of the main liberal Minjoo Party of Korea, called it a “safe appointment,” while Chung Jin-suck, floor leader of the Saenuri Party, said Lee was a “good listener” and vowed to better cooperate with the Blue House through him.

Park Jie-won, floor leader of the People’s Party, however, said he was “dubious” that an administration expert would be able to solve a myriad of current affairs that have to be “dealt with politically.”

Park said he regretted losing former chief of staff, Lee Byung-kee, who didn’t hesitate to discuss with the opposition parties through unofficial communication channels. An’s appointment was criticized by the Minjoo Party’s spokesman Lee Jae-kyung, who wrote in a statement that the president’s selection failed to give the “slightest answer” to an angry public that showed its resentment toward the current administration in last month’s election.

“It’s disappointing that we can’t expect a change in keynote economic policies,” the spokesman wrote.

In the April 13 general election, the president’s Saenuri won 122 seats, while the Minjoo Party won 123 seats and the centrist People’s Party won 38.