American journalists back for Gwangju anniversary

American journalists back for Gwangju anniversary 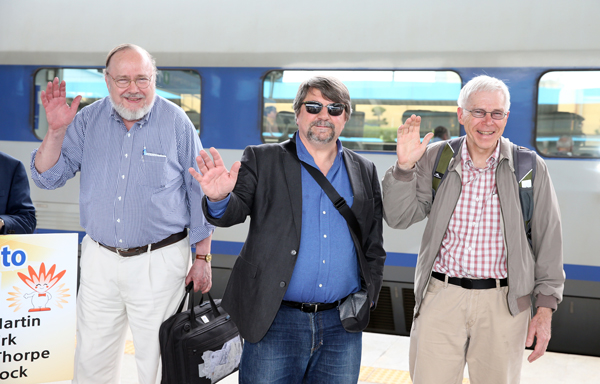 From left, Bradley K. Martin, Tim Shorrock and Norman Thorpe, who covered the 1980s pro-democracy protests in Gwangju arrive at the Gwangju Songjeong Station on Sunday by KTX bullet train from Seoul. One more reporter was scheduled to arrive that night for a five-day program commemorating the 36th anniversary of the uprising. [JANG JEONG-PIL]

Four American journalists who covered the pro-democracy protests in Gwangju during the 1980s returned to the city on Sunday in time for the 36th anniversary of one of Korea’s most defining political moments.

On May 18, 1980, the Chun Doo Hwan regime began a crackdown on pro-democracy protestors in Gwangju, located 167 miles south of Seoul, which killed over 100 people.

At that time, Bradley K. Martin was a correspondent for the Baltimore Sun, Norman Thorpe for the Asian Wall Street Journal, Tim Shorrock for the Journal of Commerce, and Donald Kirk for the Chicago Tribune.

The four men were invited by the Gwangju metropolitan government and the Gwangju-South Jeolla branch of the Journalists Association of Korea to discuss the past, present and future of Korean democracy today.

During their five-day visit, they are also planning to participate in a memorial ceremony honoring Jurgen Hinzpeter, a former correspondent for the German public broadcaster ARD-NDR in Japan, who died in January and was buried in Gwangju recently upon his will.

Other programs on their itinerary include a one-on-one mentoring program with college students majoring in journalism, a tour of the city, and open discussions with the public.

Martin currently works as a freelance writer and editor after decades of covering Korea and other parts of Asia for the Wall Street Journal, Newsweek, Asia Times and Bloomberg News.

The author of “Under the Loving Care of the Fatherly Leader: North Korea and the Kim Dynasty” (2007), Martin taught journalism at numerous universities including Iowa State University, the University of Alaska Fairbanks and California State University, Fresno.

After the Asian Wall Street Journal, Thorpe went on to teach contemporary Korean studies at Whitworth University in Spokane, Washington, as an adjunct professor. He will lead a course on democratization in Korea and Asia this summer at Hankuk University of Foreign Studies in Seoul.

Shorrock is currently a freelance writer and commentator on U.S. military policies in Asia and East Asian politics. In 2009, he released “Spies for Hire: The Secret World of Intelligence Outsourcing.”

Kirk now reports for numerous media outlets including CBS Radio, Asia Times and Forbes. From 1997 to 2003, he was the Seoul correspondent for the International Herald Tribune.