Kang recovers with his fourth homer of season

Kang recovers with his fourth homer of season 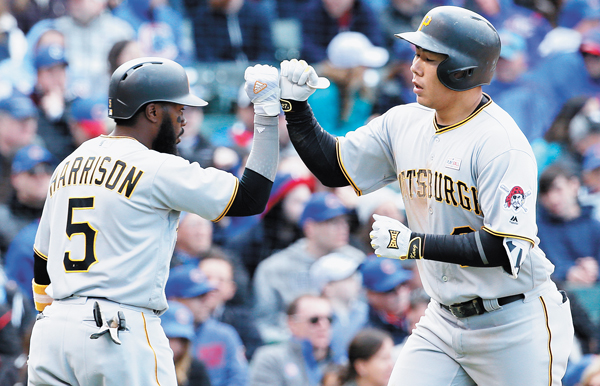 Pittsburgh Pirates’ third baseman Kang Jung-ho, right, celebrates with teammate Josh Harrison after hitting a solo home run against the Chicago Cubs at the top of the ninth inning on Monday. Kang collected two runs batted in during the Pirates’ 2-1 win over the Cubs. [AP/NEWSIS]

During the Pittsburgh Pirates’ 2-1 win over the Chicago Cubs at Wrigley Field in Chicago, Kang batted sixth and played third base to put up two hits during his four at-bats and two runs batted in (RBI).

Both runs scored for the Pirates came off Kang’s bat, who raked in a double and a home run against the team that caused his season-costing injury last year.

Playing in the bottom of the batting lineup, Kang’s first at-bat was in the top of the second inning, when he got called out on strikes after cranking three fouls. In the top of the fifth during his second at-bat of the day, Kang made contact with a 92-mile-per-hour four-seam fastball from Cubs pitcher Jon Lester but was lined out to shortstop Addison Russell. 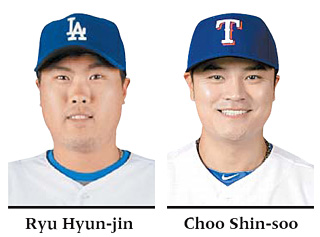 At the top of the seventh, Starling Marte singled on a ground ball and got on base for the Pirates, only to steal the second base in the next play. With Marte on second base, Kang went to the plate and had his double on a fly ball to the right side of Wrigley Field. Kang’s double brought Marte home, giving Kang his first RBI. The Pirates took the lead 1-0.

Going as the second batter of the ninth inning for the Pirates, Kang belted a solo homer against Cubs closer Hector Rondon’s 96-mile-per-hour four-seam fastball and scored for the Pirates. Although the Cubs endeavored to reduce the two-run shortage with Anthony Rizzo’s sacrifice fly ball in the bottom of the ninth inning to bring home Dexter Fowler, the Cubs’ effort wasn’t enough to narrow the two-point lead by the Pirates. Monday’s win ended the Pirates’ two-game slide.

Kang, who has only played in eight games this season after a devastating knee injury from last season, has hit four dingers so far, with his batting average at .292 as of Monday.

Elsewhere in the big league, Los Angeles Dodgers pitcher Ryu Hyun-jin and Texas Rangers outfielder Choo Shin-soo are getting ready to return to the stadium. The two Korean major leaguers have been in their teams’ disabled list due to injuries but are in the final stretch of their rehab as they were spotted in Minor League games on Monday.

Ryu was starting pitcher in the first two innings of a Single-A game for the Rancho Cucamonga Quakes, the Dodgers’ minors side, against the Los Angeles Angels’ Inland Empire 66ers, and allowed one hit and no runs while striking out two. It was Ryu’s first game since March 18 last year, when he threw his last game against the Texas Rangers for a spring exhibition game. Ryu threw 22 pitches total, and the velocity of his fastball was maxed at 87 miles per hour. Coming out of a shoulder injury that put him in the disabled list for more than a year, Ryu plans to throw three to four more minors game in the Double-A and Triple-A before returning to the top majors sometime in June.

Choo played for the Rangers’ Triple-A team, Round Rock Express, and went 1-for-4, including a home run and three RBIs. His blast of the day was a three-run home run in the third inning, when he sent the ball over the fence with one out and two runners on base. Choo suffered from calf pain on May 10 and has been in rehab since.