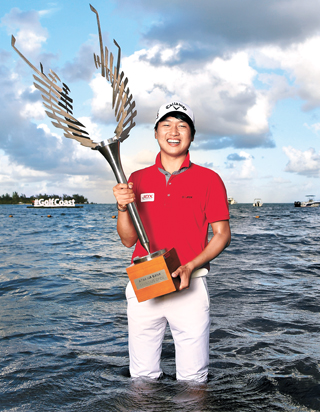 Korean golfer Wang Jeung-hun cools down with his trophy after winning the AfrAsia Bank Mauritius Open. Wang’s back-to-back titles from the Trophee Hassan on May 9 and Mauritius Open on May 15 make Wang the first Korean in the European Tour to claim two straight wins. With two European victories in his pocket, Wang now aims for the Olympics. [GETTY IMAGES]

Korean golfer Wang Jeung-hun is having the time of his life in the European Tour, clinching back-to-back titles after winning the AfrAsia Bank Mauritius Open on Saturday.

The young golfer now has an eye on the Olympics.

Coming out of his dramatic European Tour maiden win after two rounds of playoffs at the Trophee Hassan in Morocco on May 9, the 20-year-old golfer went 69-70-71-72 to aggregate 6-under 282 on May 15 at the Four Seasons Golf Club in Anahita, Mauritius, to lift another trophy from the Tour. His win makes him the first golfer to grab two straight wins on the European Tour in 10 years.

“I can’t believe that I’ve won two weeks in a row,” Wang said. “I’m so excited right now and really happy that I have won.

“I probably had luck on my side this week,” he added. “I wasn’t even thinking about winning this week until the 16th. I just kept on missing my putts, so I thought I didn’t have any chance to win.”

The event is co-sanctioned by the European Tour, Sunshine Tour and Asian Tour.

Wang began the tour tied at sixth after shooting the first round 3-under with four birdies and one bogey. He climbed to second place the next day with three bogeys, three birdies and one eagle. He remained in the second position through the third round, one stroke after Siddikur Rahman of Bangladesh, who shot 3-under during the third round.

The chance for Wang getting his second consecutive European Tour cup seemed dubious at that point, as Rahman extended his lead to three strokes over Wang before the 16th hole in the fourth round. Until then, Wang shot unimpressive three bogeys and two birdies, while Rahman captured three birdies and two bogeys. The scoreboard showed it would take a miracle for Wang to come out with a win.

However, as he did the week before, where he nailed three clutch putts at the end of the tournament, Wang pulled off yet another late rally toward the end of the fourth round, while Rahman showed lack of persistence, to move up the leaderboard.

Wang’s chance came when Rahman double-bogeyed the par-4 16th hole after his tee shot went out of bounds, only to go on and bag another bogey at the 17th. Wang kept his composure and parred the 16th. He got into a predicament when he bunkered the tee shot.

However, this was when that much needed miracle happened for Wang. He escaped the bunker in the next stroke with an astonishing chip to land the ball inside the green only a few inches from the hole. Parring the 17th, Wang took one stroke lead ahead of Rahman for the round.

The final hole was the deal breaker, with Wang taking a birdie while Rahman parred the hole to conclude the tournament.

“I hit well on the second shot of the last hole, but it went over the green, so I thought I would just make par. But I made another birdie, so it was great for me,” said Wang about his last birdie.

Although Wang is still a young talent at 20 years of age, he’s got a lot of experience in the world of golf, where competition is fierce, even for youngsters.

“However, in Korea, it is all about winning and nothing else. Children from a young age are instilled with the thought that winning is all that matters. It’s difficult to be a gentleman on the field.”

This attitude forced him to move his family to the Philippines when Wang was just a sixth grader. Although it was difficult for the young Wang to be in a foreign soil, he didn’t let up.

Wang came back to Korea in 2011, when he was in the third year of middle school. Due to his absence during the first two years of middle school, he couldn’t compete against third-year students, which meant he had no choice but to play against players two years younger.

Wang excelled in the events he participated in and this eventually provoked complaints from parents of younger golfers who accused Wang too old to be playing against their children.

Because of this, Wang was essentially ousted from the Korean middle school league.

He returned to the Philippines, though things didn’t work out well there either.

With Korea and the Philippines becoming professional no-go areas, Wang became a nomad in the world of golf in Asia.

“I felt like I was walking alone through a tunnel,” he said.

But Wang’s career didn’t come to an end. While he was searching for a competition, China opened up a third-tier PGA tour with no age limit. At the age of 16 in 2012, Wang turned pro and played in the tour, eventually topping the money rankings that year.

Many golfers are often stranded in the Asian Tour, some because of lack of skill and some because of fear of challenge. But Wang wouldn’t let the odds get the best of him, nor was he prepared to let fear prevent him from joining the bigger world.

Without the guarantee he would be allowed to play at the Trophee Hassan, Wang bought a ticket to Morocco.

“I knew if I didn’t take the risk right now, I might never get a chance to play in the European Tour,” he said. “Even if it meant I only get to practice and not play in the actual competition, I wanted to do just that in Morocco.”

His spot in the tournament opened up just before he got on the plane. He then went on to top the event after two rounds of playoffs.

Wang’s brilliant play adds more heat to the competition for a spot in the Olympics squad, which is decided according to world rankings.

An Byeong-hun, No. 24, has essentially guaranteed his position in the roster, and the remaining spot is a battle royal amongst Kim Kyung-tae, No. 43, Lee Soo-min, No. 68, and now Wang, who is expected to move up in the rankings within the top 70.

“Until last week, I didn’t think about going to Rio,” Wang said. “It’s simply unbelievable. I would like to continue with good results to eventually play in the Olympics.”