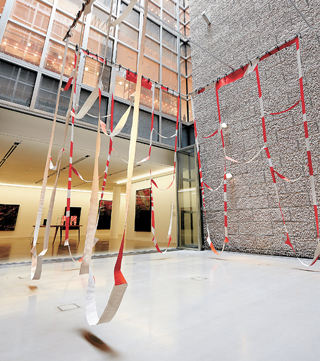 This installation is part of “Quoi? - L’Eternite (What? - Eternity),” a solo exhibition of the Berlin-based French artist Saadane Afif at Atelier Hermes in southern Seoul. The work consists of the cut-up remains of the stage curtains the artist used for a 2013 performance. The curtains were printed with an orange sun and sunbeam design.

The artist overlaid the cutouts with translucent black-and-white photos of the sea to create new pieces, as he was inspired by an Arthur Rimbaud poem that reads, “It has been found again. / What? - Eternity. / It is the sea fled away. / With the sun.” On the walls where the pieces are hung are also printed poems inspired by the works of several poets, including two Koreans. The exhibition runs through July 10.