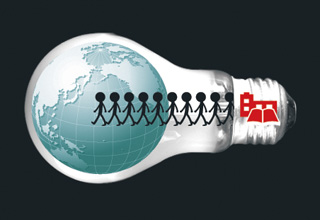 Koreans have never been too big in the realm of entertainment, culture, art and sports. The stars in the TV drama “Descendants of the Sun” have become so popular in China that the Ministry of Public Safety and Security had to issue a public warning that watching too much of the Korean TV series “could be dangerous and may even lead to legal problems,” citing real-life cases of domestic violence and divorce with housewives cooing over the stars.

Korean musicians like EXO, Big Bang and Girls’ Generation dominate charts in Asia. Koreans have become synonymous with high-ranking ladies’ golf. Foreigners who do not have much knowledge about Korea, except that there are two Koreas, know one or two names of Korean entertainers or athletes. Hallyu, or the Korean Wave, has spread the Korean brand all over the world.

Stars are not born overnight. They must be discovered, bred and trained. There are many who have gained international fame through proficiency in foreign languages, intelligence and appeal. But they are made through long-term and rigorous investment and training. Korea’s star-making skill is among the world’s best

The achievements were possible because Korea’s economic, political and social standards have reached a certain standard. Young Koreans are now bigger and stronger-built and well-educated. There are more opportunities to succeed and make money since the domestic market has become bigger, allowing many talents to sprout in the fields of cinema, drama, music and sports.

Society now encourages people to express themselves freely and rewards those who excel in what they enjoy doing. Easier access to world markets has also made people test their talents abroad. Psy became an instant global star through his viral music video.

But the phenomenon of Hallyu has not necessarily helped improve the overall image and reputation of Korea. According to the Anholt-GfK Roper Nation Brands Index, Korea’s rank was at No. 27 in 2011 after moving up from No. 33 in 2008. It is behind Japan at No. 6 and even China at No. 23. Korean enterprises are performing better, but national capacity, public policy and political and social systems are weighing down the ranking.

We must produce more global talents. Korean parents have unrivaled will and passion about educating their children. But the system to breed young minds and talents is lagging. In the 2015 university evaluation by U.S. News and World Report, Seoul National University ranked 105th and the Korea Advanced Institute of Science and Technology was at 184th, far behind Japanese, Chinese and Singaporean counterparts.

We need more creative minds from the science, engineering and technology field. Although the number has increased, Korean scientists still make up a small portion of the global share.
Nicholas Negroponte, founder and emeritus chairman of the Massachusetts Institute of Technology’s Media Lab, observed that Korea has achieved big strides in the information technology field in a short period of time, but that its education system was killing creativity in young minds.

The book “Suggestions for the Future of Korea,” co-authored by engineering professors at Seoul National University, also pointed out that Korea cannot build creative capabilities unless it comes up with a fundamentally new paradigm on education. In short, the country’s education methods must change to breed creative talents.

The Ministry of Education has been raising the quota in university science departments, but the standards of the graduates remain mediocre. Substandard universities must be shut down and replaced with high-quality institutions.

Students who work hard must be given scholarships and opportunities to study abroad. Young students should be able to take an interest in science, technology, engineering and math. More attention must be given to female and underprivileged students.

Society should be more aggressive in rewarding people according to their performance. People are less motivated to create because the rewards are poor. Society’s stratified system according to family, school and other background connections discourages people from getting ahead in society through their endeavors.

A few famous names do not move the world. But because of globalization and new technologies, one or two stars can make money for many. Korea needs to create more stars in culture, science, technology and business.

Korea will become a peripheral country in Asia if it does not lift its brand power. We must restructure our system to foster creative minds in order to sustain our rank in the region and the world.


*The author is an economics professor at Korea University.