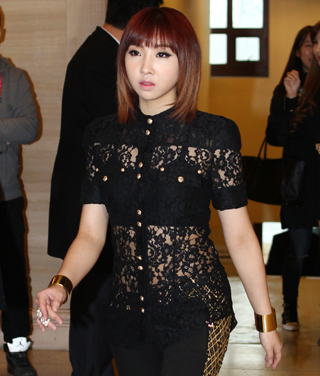 Minzy, a former member of the K-pop girl group 2NE1, has found a new entertainment agency.

Music Works, an entertainment agency that is home to musicians like famed balladeer Baek Ji-young, said on Monday that it recently signed a contract with Minzy, who declared her departure from the four-member girl group in April.

“We will fully support [Minzy] so that she can perform as a versatile musician who can sing, dance and compose,” the agency said in a press release. “She will help us in launching a new boy group as a mentor, too.”

The girl group has been releasing hit songs like “I’m the Best,” “Fire” and “Come Back Home,” and has a mammoth fan base across the globe, but they stopped performing as a group after the release of their second full-length album, “Crush,” in February 2014.

Sandara Park and CL, two members of 2NE1, have been pursuing individual careers, but Minzy and Park Bom took some time off.

It is unknown why Minzy decided to leave the group.