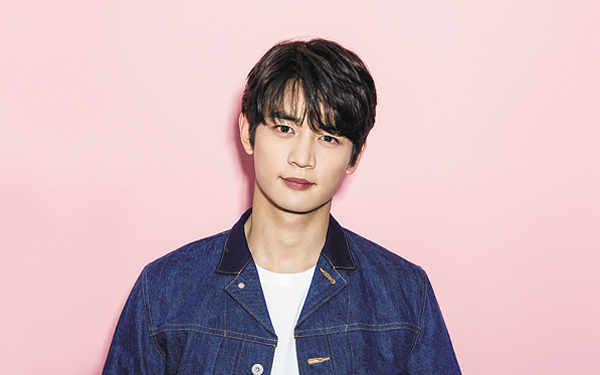 As well as being a member of the K-pop boy group SHINee, Minho is an actor. Although eight years have passed since he debuted as an idol singer, Minho recently landed his first big-screen role.

In “Canola,” he plays a teenage boy, Han, who loves Hye-ji, played by Kim Go-eun. The film is set to be released nationwide on Thursday.

The film is about a haenyeo (female diver) on Jeju Island named Gye-chun, played by Yoon Yeo-jeong. She hasn’t seen her granddaughter, Hye-ji, for 12 years, but fortunately, they meet again.

In this story, Minho’s role seems neither big nor important. And his character doesn’t appear in that many scenes.

Nonetheless, the image of Han following Hye-ji, and Minho’s big, shining eyes, will linger with the audience long after watching the movie.

“I wanted to act for a long time, and every part of my acting will serve as a foundation for my future career,” Minho said. “I’m bit dazed still that I have debuted on the big screen.”

In “Canola,” Minho plays the role of Han, who likes Hye-ji (Kim Go-eun). She has come to Jeju Island to be reunited with her grandmother, Gye-chun (Yoon Yeo-jeong). [CONTENTS NANDAKINDA]

A. I always wanted to play a role in a film, but I hardly got the opportunity. And due to my busy schedule as a member of SHINee, I could not spare any time for shooting a movie. When I read the screenplay for “Canola,” I loved it very much, because it really touched my heart. I decided to appeal to the director in order to get the role. After watching the film, fortunately, I think I did not ruin the movie.

What do you think of your character?

He was born and raised on Jeju Island, and director Chang wanted this character to be an innocent boy. Actually, he was not able to find the right person for the role, but after awhile, I was cast at last. I was very delighted to hear that the director was satisfied with the casting overall.

Was it not difficult for you to play Han, as you lived most of your life as an idol star?

When I get a role, I try to find an intersection between the character and myself, and then I begin to immerse myself in the character. If I cannot find anything in between, I try to imitate how the character would live in reality. For example, when I went to Jeju Island, I avoided watching television or using an iPad, so that I could adjust to Han’s life and be more pure like him.

What is your first impression of the filming site?

I was very nervous when I arrived, but it did not take long for me to feel the fresh and cheerful air of the site. Maybe it was due to the location - Jeju Island. When I turned around, I could see the blue sea, and in the front was a field of canola flowers. The food was delicious, and the staff was kind. It was very comfortable.

It is quite different from my days in Seoul living as an idol, since on Jeju Island, I could just be myself. While staying on the island, I pondered the direction of my life as an actor and as a singer. After this experience, the island became all the more special to me.

Would you describe one of the scenes you like?

One of them is the scene where Han follows Hye-ji to the forest, where they listen to music together. Then, Hye-ji all of a sudden asks him why he is so good to her. He falters a bit but answers simply, “You are pretty.” It is a cute and charming scene, so the director wanted me to make it as simple as possible.

Han likes Hye-ji but does not know how to express it. But realizing that there are only two of them in the forest, he was able to express his affection to her. The moments when I feel similar to the character and start to understand him better put me in high spirits.

How is your life at school?

Even though I started my career as a singer, I did not want to give up my dream of being an actor. So I decided to study film at Konkuk University.

At first, I studied hard to satisfy my thirst for acting, but later I put more effort into building intimate relationships with my classmates. If there are sports games, festivals and so on at school, I participate in almost all of them. It gives me great pleasure because my friends treat me sincerely as an ordinary classmate.

Would you elaborate more about your everyday life?

I am no different from other boys who like to play games, chat and drink with friends and work out. Maybe I could say that I am a little bit more mentally mature than others because I started work earlier than others of my age.

Do you ever feel frustrated when acting?

Of course I do. When I review the scenes I acted in the field, I feel a bit regretful. However, after I see my acting on screen from the audience, I am angry with myself. I feel remorse about why I did not act in a better way or analyze the character more.

One day, my acquaintance asked me to give him advice on how to act along with his career as a singer. He reminded me of my past. So I told him not to do anything he will regret later. That is a big task for me as well.