LG nurtures talent from within

LG nurtures talent from within 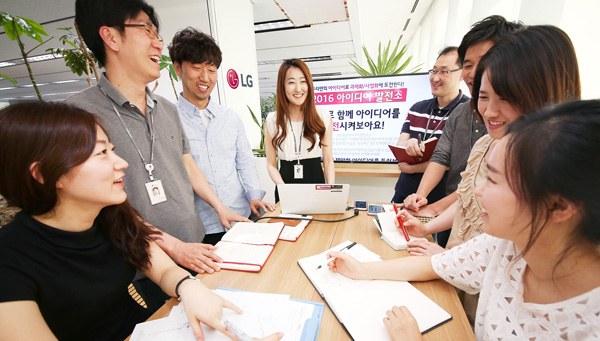 Researchers under the chief technology officer’s unit at LG Electronics discuss ideas at the “Idea Plant.” The Idea Plant is part of LG’s efforts to incubate innovation-centered culture. [LG ELECTRONICS]

LG Electronics is following in the footsteps of its rival Samsung Electronics in urging in-house start-ups and spinning them off - a move to discover hidden talent as it searches for new growth engines.

The nation’s No. 2 electronics company said on Monday that it will let two internal business units go independent, and support them by providing related technologies and patents as well as providing counseling from start-up experts.

LG says workers belonging to the spun-off start-ups may return to the company at any time in the next three years so that they may share the “innovative DNA” they gained from the experience and encourage other employees to take the challenge.

The world’s second-largest TV producer also launched an “Idea Plant” program, where researchers under an exclusive unit overseen by Chief Technology Officer Ahn Seung-kwon may come up with ideas, products and services. The company is offering a 10 million won ($8,500) subsidy for each project to be commercialized over a period of five months.

“We will fully support openly innovative activities such as the establishment of external start-ups and running idea plants to help spread creative corporate culture,” Ahn said.

One of the two internal projects to develop from LG Electronics-born start-ups is Acanvas, a cable-free art display that lets users access millions of works of art through a digital frame.

The customized display is made possible through an app that uses curated Art Stations to stream new artwork from a variety of artists and genres. The project has raised funding through Kickstarter since May 12 with a goal of $100,000. It has collected $44,991 as of Monday.

The other is Infit & Company, which uses a near-infrared ray instead of radiation to find inflammation within tissue and diagnose rheumatoid arthritis.

LG’s move comes four years after Samsung launched C-Lab, short for “creative lab,” to incubate start-ups created by its own employees. Samsung said the goal is to foster a creative corporate culture and give entrepreneurs an easier way to commercialize their technology.

Some 100 projects have been led by the C-Lab over the past three years, and Samsung has thrown its weight behind three key projects. SK Planet, a content arm of SK Group, has also been operating its PlanetX Incubation Center since 2011

It was the success of Naver that inspired Samsung. Lee Hae-jin, the billionaire founder of Naver, was working for Samsung SDS when he first developed the search engine service and portal site in 1997. He broke away from the IT service arm of Samsung in 1999 to develop Naver into the most powerful web service in Korea.

As Internet service began booming in the mid-1990s, tech companies, flush with capital, rushed to encourage employees to develop innovative ideas into businesses. Samsung was one of them.