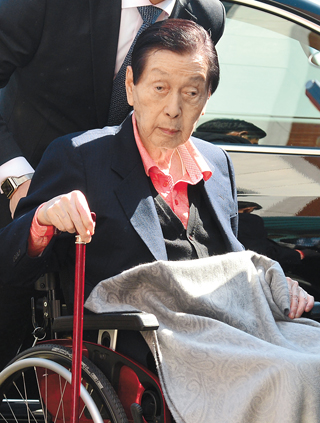 Shin Kyuk-ho, founder of Lotte Group, checked into a hospital on Monday to have his mental health examined, a legal procedure ordered by a court to verify his oldest son’s claim that the patriarch named him heir to the nation’s biggest retail group.

The chairman refused to answer any questions from a pack of reporters waiting in front of Seoul National University Hospital in central Seoul.

The 95-year-old general chairman’s hospitalization for the next two weeks follows his younger sister Shin Jung-sook’s filing of a petition last December to allow four members of the family to become his adult guardians.

She argued that Shin “seems to be in a mental condition that would not let him make the right decision.” Shin was scheduled to go through the mental health test last month, but the plan was delayed after he insisted that he has “no problem with my health.”

The court may name a single adult guardian for Shin, or several, if it determines he is unable to make legal decisions due to mental disorders as a result of disease, physical disability or old age.

Shin Kyuk-ho’s two sons have been involved in a battle royale over succession since January 2015.

The younger son Shin Dong-bin wrested control of Lotte Group from his older brother and claims his father has judgment issues due to old age.

But older brother Shin Dong-joo insists the patriarch is normal and still supports him as heir. He has released several videos of his father making a statement or having a conversation to support his argument, but it has backfired and increased speculation that Shin suffers from Alzheimer’s.

Should the Lotte patriarch’s mental state turn out to be normal, it may give trouble to the current Lotte chairman. Shin Dong-joo filed several lawsuits against his younger brother and Lotte, based on a power of attorney signed by the patriarch.

The brothers continued their war ahead of their father’s hospitalization. Shin Dong-joo asked the court to ban the younger brother from visiting him in the hospital, but Lotte told reporters that the court in March ruled that relatives may visit the founder for one hour twice a week.