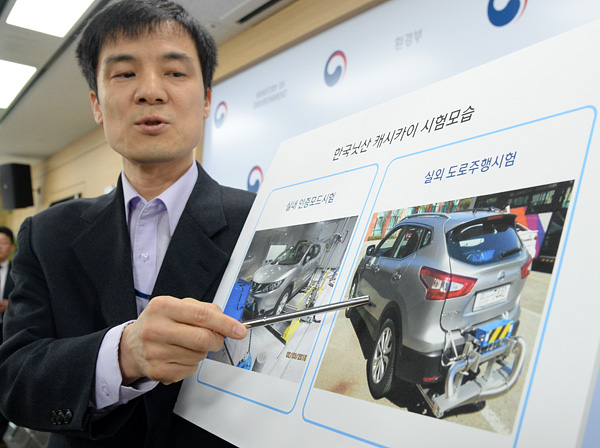 Nissan Korea is being ordered to recall hundreds of its diesel-powered Qashqai sports utility vehicles after the Ministry of Environment said it cheated on emissions tests.

The Qashqai, which is imported to Korea from the United Kingdom, has sold 814 units since it was released in November 2015. The company has denied any “intentional manipulation”.

After an emissions rigging scandal involving Volkswagen swept the world, the ministry started testing 20 different diesel cars that were sold in Korea for 150 days from December 2015. The result of the investigation was disclosed on Monday.

Auto experts concluded unanimously after two rounds of meetings in March and April that “the device is deceitful,” the ministry said in a statement.

The Qashqai was found to emit 1.67 grams of nitrogenous compound per kilometer, more than Volkswagen’s Tiguan, a model already found to have manipulated emissions controls through a so-called defeat device. Tiguan emitted 1.11 grams per kilometer on average, according to the ministry’s official data. The official emissions limit is 0.08 grams per kilometer.

The Ministry of Environment pre-notified the company of the emissions rigging findings on Monday. The automaker has 10 days to respond before the ministry can impose a 330 million won ($280,000) fine and demand the company recall all 814 affected vehicles. Future sales will also be suspended.

Once recall orders are officially delivered, Nissan Korea needs to submit a recall plan within 45 days from the date the order is given.

“Like Volkswagen’s case, we missed the cheating since the device was set up to operate properly for the initial testing,” a ministry official said. “We will hold a hearing with the automaker in May under the Clean Air Conservation Act and then cancel certification of Qashqai’s emissions test.”

The ministry said it is also planning to sue Nissan Korea CEO Takehiko Kikuchi for selling the faulty car.

Of the 20 most popular diesel cars tested by the ministry, only BMW’s 520d was found to have met emissions standards. Another 17 cars emitted 1.6 to 10.8 times the required limit, though not as much as Qashqai and QM3.

“Other regulatory agencies in the European Union known to have stricter emissions test standards have already concluded there was no intentional manipulation in setting up the exhaust gas recirculation device,” the company said in a statement. “We have never, in the past and until now, installed a deceitful device on any of our cars.”