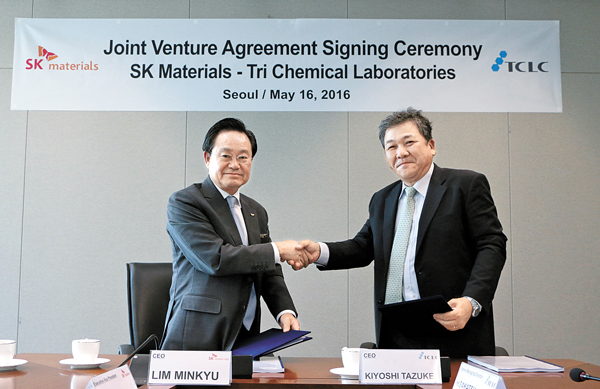 SK Materials is expanding its business into the semiconductors precursor market in a joint venture with Tri Chemical Laboratories of Japan.

SK Materials announced on Monday that it will be investing 65 percent of the 20 billion won ($17 million) initial investment in the joint venture, while the remaining 35 percent will be covered by the Japanese company.

Precursor is an organic-metal compound that applies a thin film on semiconductor circuits. According to SK Materials, the global precursor market is estimated to be worth 700 billion won.

The Japanese company is the first in the world to commercialize zirconium precursor and has the best technology in the field.

The manufacturing plant for the joint venture is expected to break ground at the Myeonghak industrial zone in Sejong City in June and to go into production early next year.

SK Materials, which was previously under another Korean energy group, OCI, was bought by SK Corporation last year. In the first quarter this year, the company reported revenue of 97.3 billion won and operating profit of 34.4 billion won. The revenue is 29 percent higher than the same period last year, and operating profit has increased 58 percent.