Who splashes out on cosmetics? The elderly

Who splashes out on cosmetics? The elderly 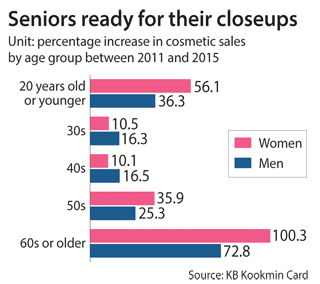 Park Mun-kyu, a 66 year-old retiree, uses toner and moisturizer every time he washes his face. When he goes out, he always puts on sun block.

When Park shops for products at a cosmetics store, he’s careful to choose the product that suits the oiliness of his skin.

“I’ve paid much more attention to tending to my skin then I used to,” Park said. “I have more time to spare than when I was working. I get a lot of comments on how fair and young I look.”

Young senior citizens, defined as people in their 60s, are becoming a major force in the Korean cosmetics market. They’ve got the time, the money and the will to slow down time and their own aging.

According to a recent big data analysis by KB Kookmin Card, purchases of cosmetics and related products have surged among Koreans in their 60s, and that is just as true for men as it is for women.

Such increases are exceptionally high even when considering the fact that the number of Koreans who are 60 years old or older grew 20 percent during the same period.

On average, they made 2.7 purchases a year and spent an average of 92,000 won in a single purchase.

Customers in their 20s shopped for cosmetics and related items more often, averaging 6.82 shopping excursions a year. But their spending per visit only amounted to 18,000 won.

“Unlike younger people in their 20s, who purchase mid-to-low cosmetics goods, older people who are better off have the tendency to purchase more high-end products,” a KB Kookmin Card official said.

By region, the elderly living in the Jeolla provinces and Chungcheong provinces spend more on their grooming than those living in Seoul and Gyeonggi.

This is believed to have resulted from people returning to their hometown after retirement. Women who are aged 60 years and older and live in the Jeolla provinces spent an average 354,000 won a year, which is 32 percent more than women in the same age group living in Seoul.

Gokseong in South Jeolla saw the sharpest growth. This area doesn’t have many cosmetics shops, and as a result, it has active door-to-door sales.

“The older customers ask for high-end cosmetics and have a huge interest in anti-aging products,” Kim Hyo-jeong, a 53-year-old door-to-door saleswoman, said.

According to Kantar Worldpanel, a marketing research company, door-to-door sales have been growing especially as the population of younger senior citizens with strong purchasing power grows.

“There is a strong desire by people in their 60s to look young, and they are backed by stronger financial situations [then older people in the past],” said Shin Go-eun a researcher at Kantar Worldpanel.

In Japan, which is already an aged society, 46.7 percent of cosmetic product buyers are in their 50s or older, according to a report by the Korea Trade-Investment Promotion Agency.

Japanese companies are producing special products for customers in their 50s and up.

Kanebo Cosmetics, a Japanese company, released Twany Glow, a skin-care line for customers who are 60 years of age and older. Shiseido introduced PRIOR, which is targeted toward senior consumers. Kao, a makeup brand, introduced a foundation product that comes with a magnifying glass.

“As the population is getting older, anti-aging is a major theme that Korean cosmetics companies are focusing on,” said Na Eun-chae, a researcher at Korea Investment & Securities.