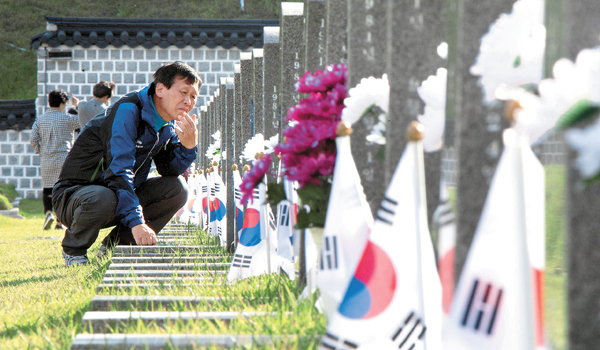 A tearful mourner visits the May 18th National Cemetery in Gwangju on Monday, two days before the 36th anniversary of a historic democracy movement and massacre that left more than 100 people dead. [OH JONG-CHAN]

The reconciliatory mood between the Park Geun-hye administration and rival political parties dissipated Monday, as the government decided to reject liberal leaders’ demand to designate a controversial song an official anthem for the 1980 popular uprising in Gwangju.

The Ministry of Patriots and Veterans Affairs issued a press release on Monday announcing a plan to hold a 36th anniversary ceremony for the May 18 Democratization Movement. According to the ministry, the song “March for the Beloved” will be performed by a chorus during the ceremony, and participants who wish to sing along can do so.

The song was written in 1982 for a posthumous wedding ceremony of two protestors killed by military forces during the 1980 Gwangju uprising. Hundreds of civilians were estimated to have died in the suppression of the uprising against the authoritarian Chun Doo Hwan regime.

Novelist Hwang Sok-yong wrote the lyrics of the song, and Kim Jong-ryul, a music student, composed the melody. It has become an anthem for democracy activists for decades.

North Korea, in 1991, used it as background music for a film, fueling controversy surrounding the song and its ideology.

In 1997, the government designated May 18 an official commemoration day for the democracy movement. Until 2008, singing the song was required during the state-sponsored ceremony. Some conservative groups, however, complained that it was inappropriate for top government officials, including the president and prime minister, to sing it because of its apparent link to North Korea.

In 2009 and 2010, the government did not include the song during its ceremonies, but allowed a chorus to perform it before the events. Liberal groups demanded it be included in the official ceremony.

The government decided in 2011 that the song would be performed by a chorus during the main ceremony, and participants were allowed to sing along if they wished to. The ministry said the lyrics of the song could damage the unity of the country because it was used as background music for a North Korean film.

Last week, the floor leaders of the Minjoo Party of Korea and People’s Party asked President Park Geun-hye to designate the song an official anthem for the May 18 Democratization Movement.

The request was made during Park’s meeting on Friday with leaders of the three major political parties. The Blue House said the president promised to order the Ministry of Patriots and Veterans Affairs to find a resolution that will not split public opinion.

Anticipation ran high, particularly among liberals, that Park would accept the request in the spirit of bipartisanship. But the ministry said Monday it would maintain the current ceremonial practice regarding the song.

The ministry also said the Blue House did not issue any direction on how to handle the situation.

“There was no direct order or guidelines,” said Choi Seong-sik, a public affairs official from the ministry. “The president just said we should come up with a good plan that will not split public opinion. That was all.”

The Minjoo Party was furious.

“I want to make clear that we cannot cooperate with this administration if singing the song does not become a mandatory part of the ceremony,” said Woo Sang-hoo, floor leader of the Minjoo Party, which won 123 seats in the April general election to become the largest party in the National Assembly.

“I’ve already spoken with People’s Party floor leader Park Jie-won. If our request is not met, we agreed to pass a resolution to urge the dismissal [of the minister of patriots and veterans affairs].”

Woo also expressed his displeasure with the Blue House’s snub.

“I don’t understand why the Blue House only informed the People’s Party about the decision,” he said during a party leadership meeting.

“Maybe it wants to form a partnership only with the People’s Party. I want to know why.”

Earlier in the morning, Park Jie-won, floor leader of the People’s Party, posted on Facebook that he had been informed by the Blue House about the decision in advance.

“The attitude of this administration on May 18 will decide the bigger flow of state affairs,” Woo warned.

Park Jie-won of the People’s Party said he urged the Saenuri Party and Minjoo Party to work together to revise the law to make the song an official anthem for the May 18 Democratization Movement Day.

The floor leader said the decision clearly destroyed the reconciliatory mood between the Blue House and liberal parties. “It completely ruined the meeting of three days ago that stressed the importance of cooperative politics and communication,” he said.

The Saenuri Party made a rare move Monday and asked the administration to reconsider its decision.

“It is regretful that the ministry decided to not require the participants to sing the song,” Chung Jin-suk, floor leader of the Saenuri Party, said. “It is our party’s position that the decision be reconsidered, since two days are still left before the ceremony.”

Chung made clear that the party has no intention to support the firing of Minister Park.