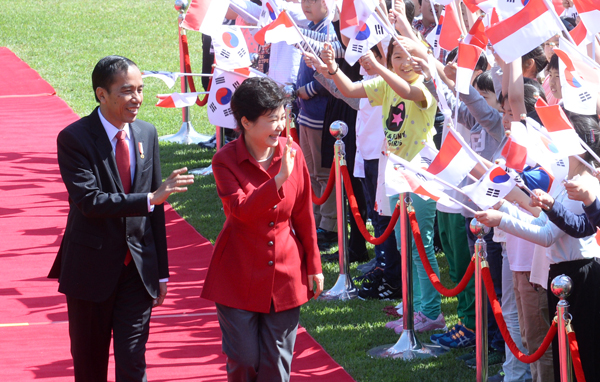 Korea and Indonesia agreed Monday to cooperate on Korean companies’ participation in infrastructure projects in Indonesia worth about $6.7 billion at a summit between President Park Geun-hye and President Joko Widodo.

The two leaders held a summit at the Blue House Monday and discussed a series of economic projects. The Indonesian president, better known as Jokowi, arrived in Korea on Sunday to start a three-day state visit at the invitation of Park.

Marking the 10th anniversary of a strategic partnership between the two countries, the leaders discussed cooperation in a wide range of areas including politics, trade, investment and energy industries. According to the Blue House, the two presidents discussed 11 memoranda of understanding including eight economic deals to expand bilateral cooperation.

A memorandum of understanding for the gas pipeline construction in Palembang and Bali areas was signed Monday. The Korea Gas Corporation will form a consortium and participate in the project, which is worth $600 million.

Indonesia’s plan to upgrade its traffic infrastructure ahead of the 2018 Asian Games was also discussed. A memorandum of understanding was also signed after the summit between the Korea Rail Network Authority and Jakpro, a property developer owned by the city of Jakarta, to build a 20-kilomter light rail transit system. The project is estimated at $2.1 billion.

The two leaders also discussed bilateral trade. Park requested the Indonesian president lower tariffs imposed on 65 items including steel and cars because they are higher than the rates under the Korea-Asean free-trade agreement. Indonesia is one of the 10 members of Asean.

Korea and Indonesia also signed a memorandum of understanding to expand cooperation in cultural exchanges to the fields of digital content, music, games, fashion and advertisement. The Blue House said the agreement will provide more business opportunities to Korean content providers in the country with the world’s fourth-largest population.

According to the Blue House, about half of Indonesia’s population of 250 million is under the age of 25, and Korean cultural content is particularly popular among children and youngsters.

The country’s content market was worth about $12 billion won ($10 million) in 2015 and is growing at an average rate of 11.7 percent annually.