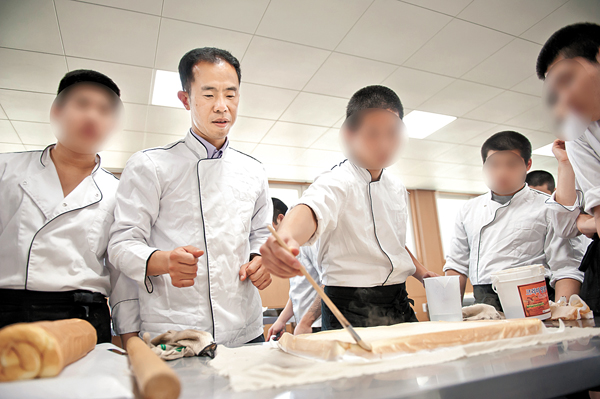 A chef at a prestigious hotel on Jeju Island gave up a chance to study in Japan to become the first person in Korea to teach baking at a juvenile reformatory, reducing recidivism among his students to almost zero percent.

Yoon Du-nam, 47, was preparing to study in Japan when a friend told him that the juvenile reformatory on Jeju Island was looking for a baking teacher.

Yoon was hesitant to take the job. He knew the reformatory was home to the worst juvenile delinquents on the island. But Yoon had longed to be a teacher. He applied for the job and started teaching his skills at the reformatory in 2003.

In 2007, Yoon moved to the Seoul Juvenile Training School, where he started teaching baking to young delinquents in room 205. Due to the unexpected popularity of the course, a second class was added.

Yoon was proud that baking became even more popular than the standard favorites among the students, which were car maintenance and information technology classes.

According to statistics from the Ministry of Justice, about 20 percent of juvenile delinquents from reformatories commit crimes after they become legal adults and end up in jail.

But the recidivism rate for students Yoon taught over the last eight years is close to zero percent. All together, about 1,000 of his former students live crime-free lives with steady jobs.

The parents of the students call Yoon’s remarkable accomplishment the Miracle of Room 205.

Every May 15, Teacher’s Day, Yoon is busy answering calls and taking messages from his former pupils. Yoon has made it a point not to change his phone number in the last 13 years.

On May 12, three days before Teacher’s Day, a former student of Yoon, who requested to be identified by the pseudonym Kim Min-soo, 22, came to visit his him in the Seoul juvenile reformatory.

Kim brought a bundle of red carnations, which symbolize respect and appreciation, and a handwritten letter.

“You have a lot of wounds on your hands,” said Yoon, carefully examining Kim’s hand. “I told you to make it a habit to wear gloves when using the oven even if it’s troublesome.”

Kim smiled shyly. The two of them are close and Yoon often visits Kim’s workplace.

Kim’s parents went through a divorce immediately after he was born. When Kim was 6 years old, his father married another woman, with whom Kim had difficulty becoming close.

After Kim’s father collapsed from a stroke, he fell in with a bad group. They wandered the streets and got into trouble. In May 2011, he was sent to the reformatory for larceny.

According to Kim, the only idea he had when applying for the cooking class was to get out of the reformatory as soon as possible. Over time, Kim was touched at the interest and care Yoon showed toward him.

“Min-soo, show your stepmother you can change by passing the university qualification exam and acquiring a license for baking and confectionery,” Yoon told Kim and his stepmother when Kim first came to the reformatory.

“You have to promise that you will treat Min-soo like a son of your own when he passes the exam and license test,” Yoon told Kim’s stepmother.

While studying baking at the reform center, Kim had a tattoo on his arm removed and he passed the qualification exam, the baking and confectionery license test, and even earned a grade 2 barista certificate.

Thanks to his exemplary rehabilitation, Kim was released from the reformatory nine months earlier than his original sentence.

In September 2012, a months after his release, Kim started working for a major bakery company. Kim is now on good terms with his stepmother and his father’s health has started improving. Kim said his goal is to become a head chef of a restaurant.

In 2014, Yoon was granted the Teacher of the Year award by the Ministry of Justice, an award given to only three teachers from all juvenile reformatories in Korea.

Recently, Yoon was hospitalized for five months after he was beaten by one of his students last November. But he is undaunted. “They are just kids; it’s typical things they do,” Yoon said with a smile. “It will still not stop me from teaching in the juvenile reformatory.”

“People are like dough,” continued the baking teacher. “Both have to be ripened for a certain amount of time. The teens in the reformatory have just tripped up temporarily. They will ripen appropriately, and I look forward to them growing up to become responsible adults.”