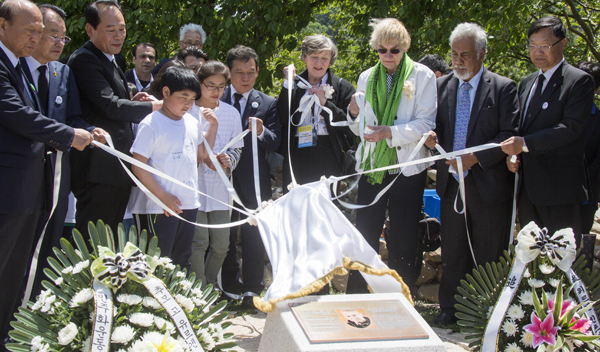 A memorial ceremony of the late Jurgen Hinzpeter, a German reporter who filmed the May 18, 1980, Gwangju massacre, the first video to show the brutal crackdown to the world, was held in the cemetery where the victims of the pro-democracy movement were buried until 2002, in Mangwol-dong, Buk District, in Gwangju. [OH JONG-CHAN]

Some remains of the late German reporter who filmed the bloodshed of the May 18 Gwangju massacre in 1980 were buried next to victims who died fighting for democracy in Mangwol-dong, Buk District, in Gwangju on Monday.

Jurgen Hinzpeter, a correspondent for the German public broadcasting company ARD-NDR, filmed the military’s brutal crackdown of the pro-democracy movement in Gwangju.

The video footage of forces attacking demonstrators with tanks, bodies of protestors lying in front of the South Jeolla Provincial Government Building and relatives weeping over the bodies was broadcast in Germany.

It was the first video showing the government’s ferocious assault on its own people, which led to the deaths of 155 people, according to the May 18 Memorial Foundation. An additional 77 people were missing and never found.

A memorial ceremony for Hinzpeter was held in a memorial garden in Gwangju that was built by the May 18 Memorial Foundation and named for Hinzpeter.

“It was my husband’s dream to be buried next to the people and the students who died in the massacre in May 1980 while fighting for democracy,” Brahmstaedt said with tears in her eyes. “I also think it’s meaningful to bury him in such a historical location, as per his wishes.”

After suffering a heart attack in 2004, Hinzpeter asked his family to bury him in Gwangju. The family disagreed. The retired reporter asked for at least some of his remains to be buried in the city.

Hinzpeter visited Gwangju in 2005 and entrusted some strands of his hair and nail clippings to the May 18 Memorial Foundation and requested they be buried with the victims of the pro-democracy movement.

On Sunday, Brahmstaedt placed those remains inside a celadon urn and buried it beneath a memorial stone. A chronology of Hinzpeter’s life and his major accomplishments were written on the stone.

Gwangju Mayor Yoon Jang-hyun granted an honorary citizen medal to Hinzpeter’s family. Xanana Gusmao, the founding president of East Timor, also offered consolation to the family and gave a green scarf from his country to Brahmstaedt.

After the burial, participants sang the song “March for the Beloved,” an anthem of the Gwangju democracy movement.

A movie about a taxi driver who helped Hinzpeter cover the demonstration, “Taxi Driver,” is being planned as well. Veteran actor Song Kang-ho and rookie actor Ryu Jun-yeol will star in the film.