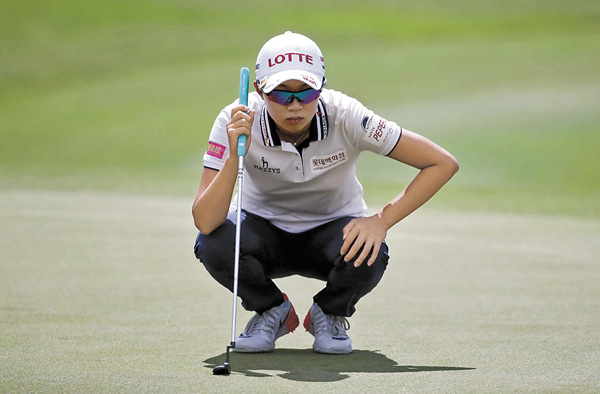 Korean golfer Kim Hyo-joo carefully prepares to putt. Since her win at the opening tournament, Kim has been struggling in the LPGA this year. [NEWSIS]

Korean female golfer Kim Hyo-joo’s Olympic dream is thinning away. Kim had a promising start this year, winning a trophy at the opening tournament, the Pure Silk Bahamas LPGA Classic, in late January. Since then, however, Kim has been on a declining trajectory, unable to make the top-10 list in the past five events including the pre-eminent ANA Inspiration. She even failed to make the cut two weeks ago at the Volunteers of America Texas Shootout Presented by JTBC.

In the past, Kim has proven that she’s big-stage material, finishing in the top 25 in 22 LPGA events in a row. Kim even won a major event at the age of 19 in 2014 when she took the title at the Evian Championship to become the third youngest in the history of LPGA to win a women’s major title. But looking at this year alone, all those achievements seem to be little more than the faded tales of yesteryear. In the 11 events this year, she’s been outside the top 30 on six occasions. Subsequently, her world ranking plummeted down to No. 13, or seventh amongst Koreans, according to the Rolex Rankings. What’s even more disconcerting is the discrepancy in average points.

Given that only four top golfers can make the Olympics roster, the last golfer to join the team according to current ranking would be No. 8, Chun In-gee. Between Chun and Kim, there is a 1.62-point difference. A golfer normally sees a 0.5 increase in their average points if he or she wins a regular tournament. However, for top ranking golfers, the increase is much less. Currently, Kim won’t be able to qualify for the Olympics even if she grabs two wins from regular tournaments.

At the moment, there are six regular tournaments and two major events, namely the KPMG Women’s PGA Championship in mid-June and the U.S. Women’s Open in early July remaining where Kim could tally more points before the roster is decided. This means Kim still has a chance to flip things around. However, even if she wins the major events, Kim’s chance for the summer games depends on how the top rankers such as Yang and Kim Sei-young perform. If Yang and Kim Sei-young finish in the top three in the next tournaments, it is unlikely that there will be a spot for Kim on the Olympics team roster.

Han Yeon-hee, Kim’s swing coach as well as the formal national team coach, will be travelling overseas in the first week of June to help Kim overcome her slump. Kim has already declared that she will not be attending any domestic events before the Olympics, meaning she will stay in the United States. For this season, Han decided he will go to the United States himself to take a look at Kim’s swing and putting forms. “Her shots aren’t so bad these days,” Han said. “It’s her putting that needs some work.”

Putting has always been one of Kim’s strengths. But this year so far, her putting average is 29.24, 14th at the moment among the pros. During the Yokohama Tire LPGA Classic, for example, she putted 31-30-32-32 during the four rounds of the tournament. Essentially, her overall performance suffered as she putted more than 30 times on average in each round. Her average strokes also surpassed 71, going over-par at least a round in the past eight tournaments. This is the first time Kim is shooting 71 on average since 2014. Last year, her average per round of 70.14 placed her fifth in the LPGA.

Although Kim made it clear early on that she will not be thinking about the Olympics due to these issues, no doubt a desire to play in the summer games has in the past been a driving force for her, one that seems ill-advised at the moment.