Lee returns to his goal-scoring best

Lee returns to his goal-scoring best 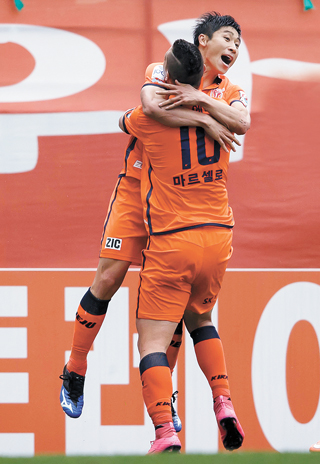 Lee Keun-ho of Jeju United FC celebrates his goal against Seongnam FC on April 23. Lee’s been bolstering Jeju’s offense since he joined the team in late March. [K-LEAGUE]

Lee Keun-ho is back in goal-scoring business with his new team Jeju United FC.

Once a star player, he spent the past few years trying to find his niche after a series of disappointments with various teams. Now he is back in top form and is clocking up goals as he appears to be embarking on a new chapter in his footballing career.

“My football life has just begun its second half,” said Lee with confidence. “As you saw during the match, I am still run and gun. I’ve got at least four more years in me.”

Last weekend during a 10th round K-League Classic match against Jeonnam Dragons FC, Lee was busy penetrating Jeonnam’s defense. He added an assist for the Jeju side who edged the Dragons 3-0.

The 31-year-old joined Jeju on March 25 after spending 2015 at Jeonbuk Hyundai FC on loan from El Jaish of Qatar. He sought a team in Japan but after Jeju’s manager Jo Sung-hwan persuaded him that he could become an invaluable asset for Jeju, Lee made a turnabout and returned to Korea for the orange jersey.

And Lee’s last-minute decision was good news for Jeju, whose offense has been struggling since Ricardo Lopes Pereira, who netted 11 goals for Jeju last season, left to join Jeonbuk early in the season.

But since Lee made his season debut with the team on April 10 during the fourth round of the K-League Classic against the Suwon Samsung Bluewings, the team’s offensive effort has risen sharply. In the past seven games since Lee started, Jeju has grabbed four wins, two draws and one loss. Before then, Jeju lost two games and managed only a single victory, which was against Incheon United FC which is ranked the lowest in the K-League standings.

With 17 points, Jeju is now fourth in the rankings, only four points behind top ranked FC Seoul. The team has also scored 21 goals total, 17 since Lee joined, matching the goals scored by Seoul and surpassing Jeonbuk by five goals.

Lee is known for his link-up plays and short passes and this suits Jeju’s style of play. “I feel I have completed getting used to the team,” said Lee. “I am working on bringing up my physical condition to its full potential so I think fans can expect better plays as the season unfolds.”

Well aware of the striker’s potential, the club and fans expect big things from Lee. Every time Lee takes possession of the ball or attempts to shoot, the fans get excited and cheer loudly for him. 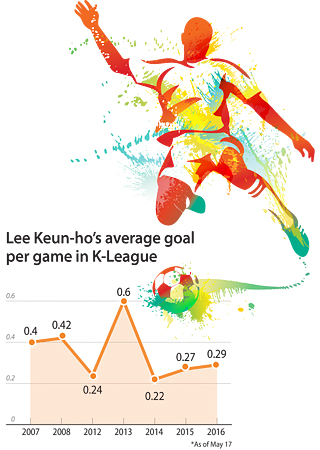 Jeju United club staff say they haven’t seen anything like the reaction Lee gets in years. And the manager is also pleased by Lee’s performance, “Lee is a playmaker who creates chances even in a pinch,” said Jo. “In terms of stamina, he’s in good shape so, we are positive that he’s going to contribute to the team’s offense throughout the season.”

Lee knows things are expected of him. “I can feel it when I step into the stadium. I want to reciprocate with goals,” said Lee.

But the expectations carry a heavy burden. Since he scored two goals against Seongnam FC on April 23, he hasn’t been able to find the back of the net. “I would be lying if I said that I am not stressed over it,” said Lee.

“I should stay focused and composed but I lose my head. What’s comforting is that the manager is patient with me.” Lee says even though he missed the penalty kick during the match against Ulsan Hyundai FC on April 17, the manager didn’t mention it after the game.

As one of the team elders, Lee assumes a leadership role and he says he enjoys mentoring younger players. “Jeju is a young team and I am the third oldest person in the team,” laughed Lee. While he says he is far from being an “old man”, Lee says that the coaching staff tell him to take it easy during training but he perseveres.

Lee’s football career peaked during the 2014 Brazil World Cup when he drilled the opening goal during the group stage game against Russia. But since then, his career had been on the decline and he lost the starting spot in Qatar and his position in the national team roster.

“At the moment, I am trying to find my place, focusing more on the club than national team affairs,” said Lee. “I will keep that thought for the future.”

He has two aims this year, helping his team to next year’s Asian Champions League by placing in the top three in the league and putting up double digit numbers in offensive points, a value combining goals and assists.