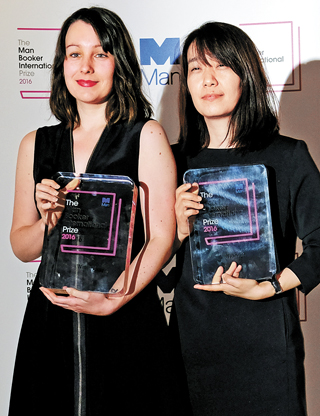 Winner of the 2016 Man Booker International Prize for fiction Han Kang, right, and her prize-sharing translator Deborah Smith pose for the media with their awards following the ceremony in London on Monday. [AP/NEWSIS]

Korean novelist Han Kang has won the Man Booker International Prize for her novel “The Vegetarian.” Han’s novel, through which she explores human violence, was selected unanimously by the judging panel, according to the official website of the prize.

“The Vegetarian” was published in Korea in 2007, and an English translation by British writer Deborah Smith has been recognized as well.

Boyd Tonkin, chair of the judging panel this year, said Han’s work was “an unforgettably powerful and original novel” written “in a style both lyrical and lacerating.” He said it richly deserved the prize.

“The Vegetarian” is the first of Han’s novels to be published abroad. It is part of a trilogy dealing with related characters.

“The Vegetarian” is narrated by the husband of protagonist Young-hye, who resists eating any kind of meat and fights against any form of human violence.

Han studied Korean literature at Yonsei University and made her debut on the Korean literary scene with five poems published in a magazine. Her first published novel was “Red Anchor,” which won the Seoul Shinmun Spring Literary Contest in 1994.

The Man Booker International Prize is conferred on both Han and translator Smith. They will split the prize money of 50,000 British pounds ($72,500).

In an interview with the Literature Translation Institute of Korea, Smith said that she believes translation is another form of creative writing.
The Man Booker Prize, sponsored by the English investment company Man Group, was established in 1969. It is given annually to a novel written in English and published in the United Kingdom.

For the International Prize, novels are required to be translated into English and published in the United Kingdom.