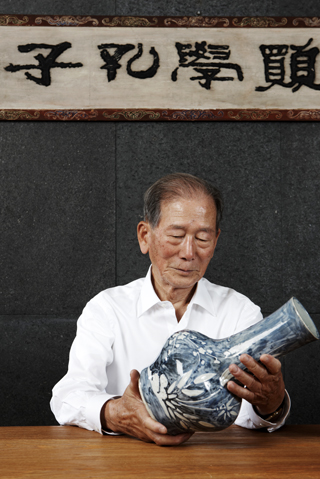 Horim Yun Jang-seob, who passed away on Sunday at age 94, looks at a piece from his collection at the Horim Museum.

Yun Jang-seob, a successful businessman who made a name for himself as Horim, an avid collector of Korean cultural heritage and founder of the Horim Museum, passed away on Sunday afternoon. He was 94.

Despite owning prospering businesses - establishing Sungbo Industrial in 1957 and Yuhwa Securities in 1962, both of which played roles in laying the groundwork for the country’s economic development - entrepreneurial ambitions like gambling on business expansions, mergers and purchasing other businesses were not to his interest.

In fact, he was more interested in spending his fortune on purchasing cultural heritage items in an effort to establish the Horim Museum in 1982, which now stands proudly as a museum with one of the finest collections of ancient Korean masterpieces, next to the Leeum, Samsung Museum of Art and the Kansong Art Museum.

To his close acquaintances, Yun is remembered as a man who often said, “I’d rather buy one more cultural relic if I had money to spend on advertising or public relations for the company.”

In 1969, the late art historians Hwang Soo-young and Choi Sun-woo, according to the museum, visited Yun to ask him if he could finance their efforts to publish a book they wrote on archaeology and art. That was the beginning of Yun’s interest in cultural heritage, and he soon became a lover of ancient Korean art.

“Back in the day, when foreigners were eager to purchase our cultural relics, Horim paid a fortune to make sure they didn’t fall into their hands,” said Yu Sang-ok, chairman of Coreana Cosmetics and one of Yun’s close acquaintances. “Thanks to him, about 15,000 items that could have been taken out of the country are still with us.”

In the early 1970s, when a house on the outskirts of Seoul cost around 1 million won, Yun spent about 8 million won, according to the museum, and bought back National Treasure No. 211 - the Transcription of Saddharmapundarika Sutra (The Lotus Sutra) in Ink on White Paper - which had been taken to Japan, presumably around 1443.

As his collection of these valuable relics grew at his home, Yun decided that it was about time to share it with the public. In 1981, he established the Sungbo Cultural Foundation and opened the Horim Museum the following year in Daechi-dong, Gangnam District, in southern Seoul. 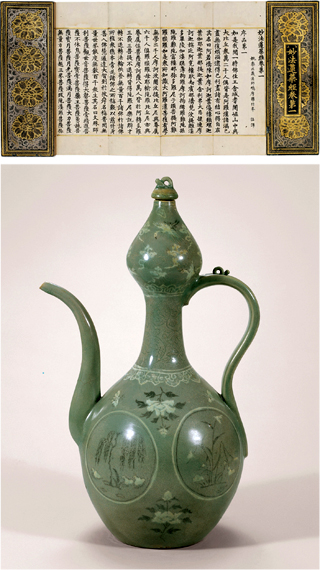 Top: Yun had paid a fortune to return National Treasure No. 211 - Transcription of Saddharmapundarika Sutra (The Lotus Sutra) in Ink on White Paper - to Korea from Japan. Above: The very first cultural artifact Yun purchased was a celadon gourd-shaped ewer. [HORIM MUSEUM]

During the opening ceremony on Oct. 20, 1982, Yun said that “opening the museum [had been his] lifelong dream and hope.”

Later on, seeing that the museum was not being visited by many people, Yun decided to expand it, relocating it to Sillim-dong in Gwanak District, southwestern Seoul, in 1999, and begin holding larger exhibitions. And eventually, deciding it was time to go a step further, Yun decided to open in 2009 a branch of the museum in Sinsa-dong, Gangnam District.

Thanks to his efforts to preserve cultural heritage for his descendants, the Horim Museum houses some 15,000 artifacts, including eight state-designated National Treasures, 52 Treasures and 11 city-designated cultural properties.

His ceaseless contributions toward preserving and sharing the country’s cultural assets were widely acknowledged, and in 2001, Yun was given the Magnolia Medal for the Order of Civil Merit. In 2009, he also received the Silver Crown for the Order of Cultural Merit. Yun is also the first Korean to receive an honorary doctorate in art history, which he received from Myongji University in 2011.

Yoo Hong-jun, a chair professor of art history at Myongji University and former director of the Cultural Heritage Administration, told the JoongAng Ilbo that he heard that Yun “had received many offers of honorary doctorates from other universities, but he rejected them all and said he would take it if it is in art history, which showed his love toward our cultural heritage.

“Horim will be remembered as one of the pioneers of the 20th century private art museum industry in Korea, together with Hoam Lee Byung-chull, the late founder of Samsung Group,” Yoo said, adding that it is “respectable that he contributed his private assets to build such a strong foundation for the Horim Museum financially, so that his descendants can continue managing it without a problem.”

Born in 1922 in Kaesong in what is now North Korea, Yun and his wife, Park Jung-yun, had three sons: Yun Jae-dong, the vice president of Sungbo Chemical; Yun Kyung-lip, the president of Yuhwa Securities; and Yun Jae-ryun, a professor of material engineering at Seoul National University. Oh Yoon-sun, director of the Horim Museum, is married to Yun Jae-ryun.

The memorial service for Yun is being held at Asan Medical Center in southeastern Seoul. His coffin will be borne out at 9 a.m. today.