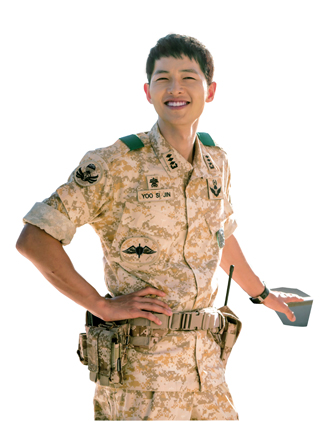 Heartthrob Song Joong-ki of the recent hit drama series “Descendants of the Sun” will make a cameo appearance on the upcoming web drama series “The Sound of Your Heart,” according to Song’s agency, Blossom Entertainment.

The agency said Tuesday that Song would play a cameo role in the web series thanks to Song’s actor friend Lee Kwang-soo, who has nabbed a lead role in the web drama series.

Lee previously appeared in the first episode of “Descendants of the Sun” in February.

Lee was in the first episode just for a few seconds, but his appearance was impressive, and Song recently told the Chinese media that he really liked the part where Lee played the owner of a firing range in the drama series.

Song and Lee are known to be close friends.

“The Sound of Your Heart” is based on the webtoon series of the same title, and the web drama will be unveiled to the public later this year first through online channels and will later be edited for TV.

“The Sound of Your Heart” is one of the longest-running webtoon series, and it deals with hilarious everyday moments.

Meanwhile, Song has been enjoying immense popularity across Asia ever since “Descendants of the Sun.” It was his first drama series after he finished his mandatory military service.

Song debuted in 2008 through the film “A Frozen Flower.”