Gov’t urged to look at PEFs for restructuring

Gov’t urged to look at PEFs for restructuring 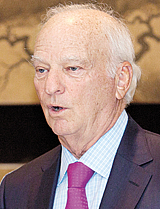 George Roberts, co-founder and chairman of Kohlberg Kravis Roberts (KKR), told reporters at a press conference held Tuesday at the Grand Hyatt Seoul Hotel in central Seoul that in a market with ongoing industrial restructuring initiatives like Korea, a PEF could be “an ideal partner.”

“It could offer insights to get away with difficult situations and with capital,” Roberts said. “PEFs can play a constructive role for both the government and the companies [subjected to M&As] by supplying capital and better business operation skills.”

Roberts said PEFs, whether Korean or foreign, could help restructurings by resolving a liquidity crunch, suggesting better management methods, strengthening desired business sectors by arranging partnerships with other foreign firms, and maintaining a better relationship with stakeholders and shareholders.

Roberts explained that KKR’s success with Oriental Brewery, a local liquor maker, was a good example. The firm profited nearly 4 trillion won ($3.4 billion) by selling off the brewery after acquiring it jointly with Affinity Equity Partners, right after the 2009 global financial crisis. The business improved in five years by reducing operating costs via advanced business methods like trading carbon credits and producing less waste water.

The Korean government as well as the local market has been skeptical of private equity funds, especially of foreign origin, in buying major Korean companies, as some believe that the sole purpose of such investment is profiting instead of contributing to the nation’s economy.

KKR, one of the world’s most notable PEF firms along with Carlyle Group and Blackstone Group, acquired 59 percent of shares in the e-commerce company Ticket Monster last year and is currently acquiring the large supermarket chain Kim’s Club from local retail giant E-Land Group.

KKR currently invests about $570 million in Korea, out of the total $11 billion it invests throughout Asia, according to the firm. Roberts said the firm wants to expand investment in Korean firms, particularly non-core affiliates of local conglomerates.

As for investment tips for growing Korean PEFs, Roberts advised local investors to focus on consumer goods and services in an era of low growth and a stagnant global economy, instead of economy-sensitive sectors like steel, shipbuilding and automakers.