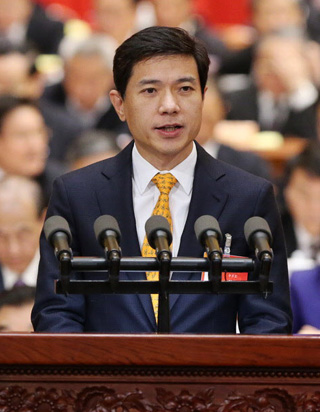 “The richest person is the one to take responsibility first,” said Jack Ma, founder of Alibaba. He also said a company should never get involved in bribery, pay wages late, dodge taxes or make counterfeits.

Robin Li, pictured, the CEO of Baidu, considered China’s Google, said that if it loses the trust of customers, it would only take a month until bankruptcy. He ordered a review of all business models, the inclusion of user reviews in standard search results and the rebuilding of its customer feedback system.

Huawei CEO Ren Zhengfei said the company is not going public because he does not work for profit but pursues ideals and goals. If the company goes public, shareholders will press for more profits, and he is not willing to go in that direction.

All these comments were made by CEOs of leading Chinese companies last week. Rather than a sense of accomplishment from getting ahead of Samsung’s smartphones and pressuring Apple’s iPhone, or pride from making the biggest daily sales revenue, they shared feelings of desperation, crisis and thirst.

China is a unique country. The socialist revolution was led by farmers, not laborers. After the revolution, China accomplished the rise of private companies with the flexible belief that “it doesn’t matter if a cat is black or white so long as it catches mice.”

Business is the flower of capitalism. President Xi Jinping and Premier Li Keqiang advocate entrepreneurship among all Chinese people, calling them to prepare business plans rather than job applications.

Meanwhile, the global brands that dominated Beijing and Shanghai have been swarmed by Chinese products. Mao Zedong’s strategy of farming villages laying siege to cities has come back. Chinese products grew stronger in rural villages and struck back at the cities that had been ruled by Fortune 500 companies for decades. It was the successful tactic that Huawei’s Ren, a former engineering officer of the People’s Liberation Army, used.

The positions of Korean companies in China are in jeopardy. Mobile phones and automobiles are in crisis. Ren ordered Huawei to be streamlined, as the company had 20,000 more employees and spent $4 billion more in operation costs compared to Ericsson. In contrast, many Korean CEOs are born with a silver spoon and are more interested in the money game and financial engineering, rather than innovation.

The Communists in China retreated from Shanghai to the Jinggang Mountains and Yan’an before rising again. Mao’s guerilla warfare strategy teaches that when the enemies approach, you run until the enemies get tired. When the enemy is exhausted, attack them. When the number of enemies is smaller than your troops, then start attacking.

Times have changed, but the essence of battle is still in the numbers. A large number of hinterlands will defeat a small number of cities. Companies need to be armed with cost efficiency rather than premiums. Consumers open their wallets when they see more value than the price.