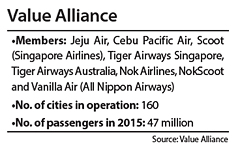 Eight budget airlines in the Asia-Pacific, including Korea’s Jeju Air, have launched an alliance for low-cost carriers called the Value Alliance.

The alliance is the first of its kind for budget airlines, although so-called full-service carriers have been operating two major alliances - Sky Team, which includes Korean Air and Delta as members, and Star Alliance, which includes Asiana Airlines and Lufthansa.

The members of the new alliance carried 47 million passengers last year across 160 cities through 17 hub airports in the Asia-Pacific region.

The network of budget carriers is set to become fully operational next year. It will run a collective frequent-flier program and launch Air Black Box, a collective online system that will enable customers to reserve flights as well as designate seats and in-flight meals and choose from various luggage insurance policies.

Jeju Air, the only participant in the Value Alliance among the five budget carriers available in Korea, says it hopes to expand its routes to Australia, Indonesia, India and Saudi Arabia with the aid of its partner carriers within the alliance.

Should a passenger wish to visit Sydney from Incheon on Jeju Air, for example, the alliance allows connections via the Incheon-Cebu route, available from Jeju Air, and the Cebu-Sydney route, run by other members of the Value Alliance. That way, the flight ticket is cheaper than if the customer booked two separate routes.

“The low-cost carrier market is changing rapidly,” Jeju Air CEO Choi Kyu-nam said in a recent statement, “and those carriers that fail to address the change in a pre-emptive manner will eventually fall behind.”

In February, when the latest data is available, 1.27 million Koreans used cheaper carriers for domestic flights, compared to the 1.01 million who used Korean Air and Asiana Airlines.