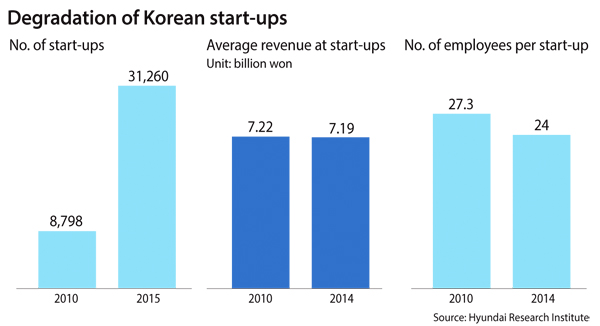 While Korea’s start-ups have been growing in number over the past 15 years, their contribution to job creation has been retreating, a report from Hyundai Research Institute shows.

The institute’s research also showed that only 2.5 percent of all start-ups in Korea in 2014 felt their key products were top quality, down from 4.2 percent in 2010. Some 30.1 percent considered their technological level “inferior” in 2014, up from 19.7 percent four years earlier.

The statistics go against general expectations that the start-ups would be boosted by the launch of Park Geun-hye’s administration in 2012, which identified the “creative economy” as one of its top policy agendas.

The government’s support served as a “poison chalice,” the think tank points out. Korean start-ups tend to be heavily dependent on government funds, and the role of venture capital has been marginal. Government funding for start-ups in 2014 accounted for 46.1 percent of total support, followed by loans from banks and other financial institutions at 36.6 percent. Venture capital made up a mere 0.4 percent the same year.

By comparison, start-ups worldwide saw 24.8 percent of their funding come from venture capital in 2015. Start-ups in China and India, in particular, have been sucking up capital from investors worldwide.

The ratio of funds that went to Chinese start-ups tripled to 16.2 percent between 2011 and 2015, whereas India saw the figure rise from 2.5 percent to 5.4 percent over the same time span.

The researcher stressed the importance of Korean start-ups grabbing leadership in the mobile, medical and health fields - leading industries in the future. She proposed that the government come up with measures and policies to boost private sector-led revitalization of the start-up community.

The government is also advised to ramp up tax incentives for venture capitalists and angel investors so they can invest more in start-ups, and to ease various regulations that impede start-ups’ technological advancement, such as the location information protection act.