All eyes are on Korea now, says SaKong Il

All eyes are on Korea now, says SaKong Il 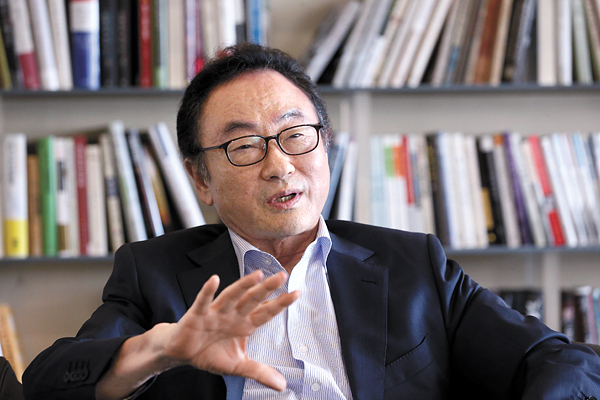 Ever since a so-called Korean version of quantitative easing (QE) made headlines after it was pushed forward by the ruling Saenuri Party in the April 13 general election campaign, the topic continues to divide policy makers and government officials.

While President Park Geun-hye took to the idea of the central bank printing money to directly finance state-run banks to help companies restructure, critics called for government-led efforts instead, such as the creation of a public fund or supplementary budget. Still, many remain confused about what exactly Korean-style QE entails and wonder whether focusing on such a policy would benefit state-led restructuring efforts.

For this, the JoongAng Ilbo spoke with SaKong Il, an expert who led restructuring efforts in a similar political setting in 1988. SaKong Il, who is also an adviser to the JoongAng Ilbo, served in the Blue House as the senior secretary to the president on economic affairs for four years from 1983. He was minister of finance from 1987 to 1988.

The following is an excerpt of the interview.

A. The term “quantitative easing” means a temporary policy to boost demand, whereby the central bank uses its authority to print money.
But the restructuring policy that Korea wants to carry out is, in fact, not a policy to boost economic demand, but a supply-side policy. It would be wiser [for policy makers] to stay away from using the word.


A s you just mentioned, some critics have pointed out that state-led restructuring efforts lack a clear definition.

“Restructuring” itself, as a term, has a comprehensive meaning. For instance, labor force reduction, financial restructuring and corporate mergers are all part of restructuring efforts.

The government needs to clearly define what exactly its goal is in pursuing state-led restructuring. If it wants to pursue restructuring in the shipping and shipbuilding industries, then it should provide details on how it intends to improve the industry’s competitiveness and effectiveness while accounting for the state of the global economy. If reducing the labor force is an option the government is considering, then the policy will need to have prepared relief measures for the unemployed, as well as financial funds to assist employee training programs.


The government is calling for a quick preparation of funds, saying there is no time to lose on the restructuring efforts. It is basically saying that revising the supplementary budget, or creating a public fund, would take a longer time, due to the legal and political procedures involved, than having the Bank of Korea (BOK) print money.

The government needs to first explain why it is in such a hurry in its restructuring efforts. There needs to be a valid cause, such as the dangers of having unemployment en masse or a serious rupture in financial security, for the BOK to be directly involved.


Do you have a suggestion as to what the government should do?

It should first of all stop using the term “quantitative easing.” The term is being used widely by the ministers and financial policy makers, but the term’s comprehensive definition leads to a myriad interpretations of policy.

Secondly, the government, under the helm of the deputy prime minister for economic affairs, should set out the blueprint for restructuring and define a valid cause for the BOK to be involved. The government should not pressure the central bank to get involved, but leave the bank to do its job.


Yet whenever the government is asked to present such blueprints, it claims that it cannot step forward to direct this or that for fear of creating trade conflicts.

I understand. Any individual country, or an international trade institute like the World Trade Organization, would have the same concerns. But it can, as long as it outlines a clear macroeconomic cause for its policy. In 2008, for instance, the U.S. government and the central bank were directly involved in dealing with the aftermath of the Lehman Brothers bankruptcy.


Some critics argue that the BOK remains too passive on the issue.

Take, for example, Mario Draghi, the president of the European Central Bank (ECB). He said, “The ECB is an independent organization and is not swayed by political pressures.” He said that if not for the quantitative easing that the ECB carried out, the European economy would be in a deep recession. The BOK should also do its job.


The government often quotes the lack of its parliamentary majority as a stumbling block. But the two successful restructuring cases in the past happened when the ruling party did not have a majority in the National Assembly.

The past examples of restructuring happened in a different setting. In the Asian financial crisis of 1997, the International Monetary Fund requested that Korea carry out restructuring. Since there was external pressure then, it was easier, politically, to carry out the restructuring.

In the mid-1980s, Korea carried out restructuring on the shipping and shipbuilding industries, which were struggling after the second oil crisis. The difficulty then was with the fact that restructuring had to done unofficially, because if the insolvency of the industries was revealed, it would further show the troubles in the bank, bringing about a foreign exchange deadlock. The dangers of having the country spiral into national bankruptcy were too great. But the restructuring of 78 industries was still carried out effectively.


What was the reason behind the success?

We communicated. Back then, there were only 12 ruling party lawmakers in the 29-member Finance Committee of the National Assembly. But when they spoke with clear logic and presented a bigger picture to the party lawmakers, they were able to reach an agreement. Yes, it is difficult, but a frontal breakthrough is the only answer here.


Some critics say that the faults of the incumbent administration and state-run banks should be acknowledged and dealt with before restructuring efforts begin.

The problem is an accumulated one, not something created instantly by companies or financial institutions. We should be talking about the economic responsibilities and costs that each stakeholder will bear. The role of CEOs, major shareholders and creditors are, of course, big, but those of labor unions and employees are also great. While the government needs to provide unemployment relief measures and such, labor unions should not remain so adamant as to be ineffective in seeking the right working environment.


What should the administration, BOK, politicians, labor unions and other stakeholders keep in mind during the restructuring process?

That the rest of the world is watching. Just before the currency crisis, foreign investors were observing whether the Korean government and National Assembly would have the will and ability to reform. They couldn’t find any. While this was not the sole cause of the currency crisis, foreign investors’ lack of trust played a part. The rest of the world is still watching Korea.