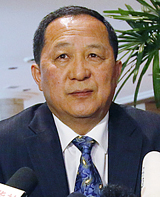 North Korea has named a career diplomat with broad experience in negotiating with South Korea and the United States as its new foreign minister, according to a diplomatic letter from Pyongyang.

North Korea’s Embassy in London informed the British government Monday that former Vice Foreign Minister Ri Yong-ho has been appointed to the position. Some Seoul analysts say Ri’s appointment could be part of a bid to improve ties with the outside world after Pyongyang’s fourth nuclear test in January led to international criticism and tough sanctions.

Ri has served as the North’s top envoy to long-stalled six-nation disarmament talks on his country’s nuclear weapons program and participated in talks with the United States in the 1990s. He also served as the North’s ambassador in London. In 2011, he met Seoul’s top nuclear envoy in Bali, Indonesia, on the sidelines of a regional security conference and agreed to work toward a resumption of nuclear talks. The agreement was considered a breakthrough at the time, but the nuclear negotiations are still stalled and have not been held since late 2008.

The North Korean message didn’t say what happened to departing foreign minister, Ri Su-yong, but Seoul’s spy agency said Tuesday that he was believed to have been promoted to vice chairman of the ruling Workers’ Party. Both Ri Su-yong and Ri Yong-ho were awarded high-level posts during the recent Workers’ Party congress. Ri Su-yong will replace Kang Sok-ju, a foreign policy specialist who negotiated a deal with the United States in 1994 to freeze and ultimately dismantle North Korea’s nuclear reactor in exchange for economic aid.