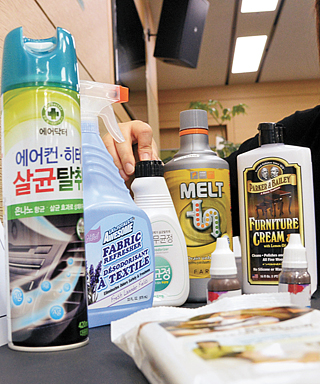 Seven cleaning agents ordered by the Ministry of Environment to be pulled from sales are displayed on Tuesday, including a shoe deodorizer. [NEWSIS]

The state-led investigation into air fresheners, odor-reducing sprays and other cleaning agents revealed seven products containing harmful chemicals - including the compound in humidifier sterilizers that killed and sickened hundreds, and even chemicals that were banned for use in household cleaning supplies 10 years ago.

The Ministry of Environment announced Tuesday that it found polyhexamethylene guanidine (PHMG), the fatal chemical found in some humidifier sterilizers, in a shoe odor-reducing spray manufactured by Biophyton.

The ministry ordered suspension of sales of seven cleaning agents, including the shoe spray and a cleaning spray for automobile air conditioners.

“The ministry conducted tests [on 331 products] as an initial test focusing on spray-type products and widely retailed cleaning agents,” said Hong Jeong-seop, head of the ministry’s chemical policy division. “They were chosen from some 8,000 cleaning agents that the Environment Ministry started to regulate from last year.”

After finding the fatal PHMG chemical in Biophyton’s shoe odor spray, the Environment Ministry tested 10 other spray-type sterilizers, deodorizers and air fresheners manufactured by the company, but did not find any fatal chemicals in them.

In the six other cleaning agents ordered pulled from the market, the Environment Ministry said it found toxic substances exceeding the regulations on toxic chemicals set by the ministry last year.

In an automobile air conditioner cleaning spray manufactured by Pilcoscam, the ministry found 40 times more trichloroethylene (TCE) than the allowed level of less than 0.1 milligrams of TCE per kilogram of product. The inhalation toxicity of the chemical is low according to the U.S. Environmental Protection Agency (EPA), yet the chemical is reported to have caused reproductive health problems and even cancer.

“The car air conditioner cleaning spray contains more TCE than it should according to the regulations set by the ministry last year,” Hong said.

Yet in the National Chemical Information System provided by the National Institute of Environmental Research operating under the Environment Ministry, the use of TCE in household sterilizer and aerosol products has been banned since 2006.

When asked, the ministry official replied that he “did not know that the use of TCE was banned” and that the ministry will “consider criminal prosecution” of the company.

In LA’s Totally Awesome Fabric Refresher imported from the United States, the ministry found 27 times more formaldehyde than the allowed level of 12 milligrams per kilogram of product.

Formaldehyde exposure can lead to allergic reactions like coughing and watering eyes in the short term, but the U.S. EPA in 1987 classified the chemical as a probable human carcinogen under acute or prolonged exposure.

Faren’s Melt Drain Unblocker, also recalled by the ministry, was found to contain seven times more the allowed amount of hydrochloric acid, and germs were detected in a Nano Dark Brown tattoo dye produced by a Korean beauty product company.

Most of the seven banned products were guilty of false advertising by claiming “the product contains ingredients harmless to humans” or did not mention some chemicals in them.