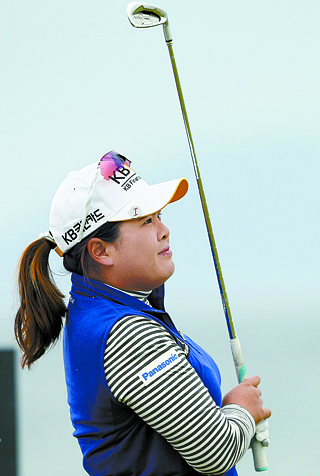 The list for the Korean Olympics team for women’s golf is narrowing down.

There are only seven tournaments remaining until the U.S. Women’s Open, which is slated to run from July 8 to July 11. This means golfers have only eight contests left before the national team roster is finalized, which is scheduled to take place on July 11 based on the Rolex Rankings.

Before the season started, nine top-ranking Korean golfers, including Choi Na-yeon, who was then No. 19, were deemed candidates for a spot on the Olympics team. However, as the season unfolded, the layout has become crystalized. Park In-bee, who is now No. 2 worldwide, will join the team unless some upheaval occurs. With one position gone, five golfers are now fighting for the remaining three tickets to Rio.

According to the Rolex Rankings, as of May 17, No. 6 Amy Yang, No. 7 Kim Sei-young and No. 8 Chun In-gee will travel to Brazil this summer. No. 9 Jang Ha-na and No. 11 Ryu So-yeon have a shot to flip things around, as well, whereas No. 13 Kim Hyo-joo and No. 14 Lee Bo-mee are slowly drifting away from any chance at the summer games.

The average point difference between Chun and Kim Hyo-joo at the moment is 1.66. Under normal circumstances, a golfer would collect as much as 0.5 points if she wins a regular tour, but this is not the case for top-ranked players such as Chun and Kim. Indeed, at this pace, Kim won’t have a chance to match Chun’s points even if she nabs two regular tournament victories. Added to this is the fact that Kim has been in a slump lately. After winning the opening tournament, the Pure Silk Bahamas LPGA Classic, in late January, she hasn’t had any decent record to speak of.

Lee’s Olympics prospects aren’t looking too good, either. After placing second in last week’s Japanese LPGA (JLPGA) tour, the Hoken No Madoguchi Ladies, Lee’s rankings rose from 15th to 14th. Her World Rankings average point score is 4.20, 0.11 points behind Kim Hyo-joo. Although Lee has been having success, she has a critical handicap. Her main stage is the Japanese tour where scores given after each tour is lower than its U.S. counterpart. Big events that Lee can partake in are the KPMG Women’s PGA Championships and U.S. Women’s Open. She can keep her chances at the summer games alive only by pocketing a victory from one of the remaining major events and at least one win from the JLPGA.

As for Jang, who has clinched two LPGA wins this season, from the Coates Golf Championship in early February and the HSBC Women’s Champions in early March, she has decided to skip two upcoming events, the Kingsmill Championship Presented by JTBC and the Volvik Championship, due to her poor physical condition. Jang has already missed three past tournaments after withdrawing from the Swinging Skirts LPGA Classic, and has been suffering from health issues including insomnia.

It is conjectured that she’s been under a tremendous amount of stress due to several unfortunate incidents and controversies early this season, including the accident at the Singapore airport where Jang’s father dropped his bag and injured Chun’s back, causing Chun to miss several upcoming tournaments. Jang also got into an altercation with other golfers when she was reported to the LPGA authority for practicing her swings in the middle of the tournament, an illegal act that could have a golfer kicked out of a tournament.

“The priority now is Jang’s full recovery,” said a close acquaintance. “She’s been receiving treatment and resting in Korea.”

Jang is maintaining her average point score in the Rolex Rankings at 5.82, and her absence will not affect this score negatively thanks to her recent success. However, to play in the summer games, Jang needs to rise in the world rankings. To do so, she needs to show up for the tour and perform well. But, Jang and her family seem apathetic about the Olympics at the moment. “My daughter’s health takes precedent over the Olympics,” said Jang’s father.

No. 11 Ryu’s Rolex Rankings average point score is 4.81, 1.16 points behind Chun. If she continues at her current pace, however, she could turn things around. Ryu has placed within the top ten twice during the past three tournaments at the Yokohama Tire LPGA Classic and the Swinging Skirts LPGA Classic. However, she is without a win in the LPGA during the past two years since her last victory in August 2014 at the Canadian Pacific Women’s Open.

Although Jang will be absent from the upcoming Kingsmill Championship presented by JTBC, the rest of the Korean golfers competing for a ticket to Rio will participate in this weekend’s event. JTBC Golf will broadcast the first round live at 5:30 a.m. on May 20.