Former stars line up as ambassadors to boost U-20 players

Former stars line up as ambassadors to boost U-20 players 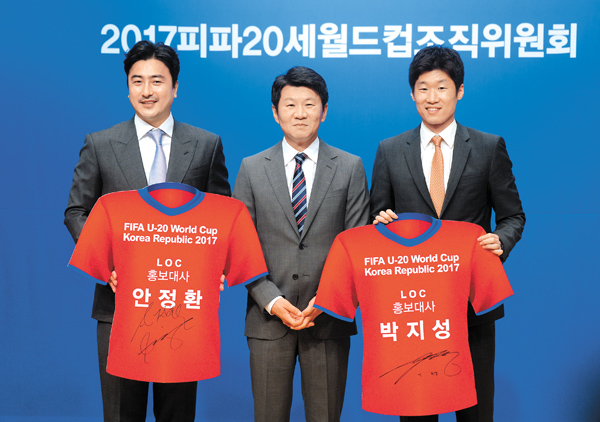 Ahn Jung-hwan, far left, and Park Ji-sung, far right, pose for a photo with Chung Mong-gyu, the president of Korea Football Association, during a ceremony on Wednesday in Seoul. Ahn and Park have been appointed as honorary ambassadors for the upcoming FIFA U-20 World Cup that is to take place in Korea from May 20 to June 11 next year. [NEWSIS]

Former World Cup stars Ahn Jung-hwan and Park Ji-sung have been elected honorary ambassadors for the upcoming U-20 World Cup in 2017.

Ahn and Park, who were key players for the Korean national team squad during their incredible run in the 2002 FIFA World Cup Korea/Japan, were appointed by the Korea Football Association (KFA) on Wednesday.

The tournament, which will feature 24 countries, takes place from May 20 to June 11 next year in various venues including Suwon and Jeonju. By hosting the U-20 World Cup, Korea will become only the third country in the world after Mexico and Japan to have hosted all major FIFA men’s events.

Ahn and Park added two and one goal each for the Taeguk Warriors in their journey to the World Cup semi-finals in 2002, defeating teams such as Spain and Italy en route.

They each have scored three World Cup goals in their career, the most among Korean footballers. They decided to join forces again after 14 years to contribute to the success of the global football youth gala at home. Ahn’s advice to players was “Give everything you have,” while Park advised young footballers to “enjoy.”

Ahn said, “It’s an honor to be appointed as an honorary ambassador for the event that takes place in Korea. I will do my best for a successful tournament and assume the mindset I had back in 2002.”

Park said, “Personally, I was sad to have never played in the U-20 World Cup but I am glad to be given a chance to partake in the event as a goodwill ambassador. I hope I can be a help to the young players in Korea.”

As iconic figures in Korean football, both Ahn and Park have gone their separate ways after retirement from playing. While Park prepares to be a football administrator for FIFA, getting ready to go through the master’s course by the world football body, Ahn has kept himself busy domestically as a commentator as well as a host of various local television shows.

As footballers, they share a tremendous amount of respect for each other with a hint of envy. “I don’t normally envy others, whether they are rich or famous,” said Ahn. “But the person that I actually was jealous of when I retired was Park. Although he is younger than I am, I have huge respect for him. He’s put Korean football on the global map and left a notable mark at Manchester United, opening doors for others after him to join the European leagues.”

“He is a talent that can be seen in Korea maybe once in a generation,” Park said about Ahn. “He’s got techniques that I simply cannot pull off. He never fell behind in Europe and his skills were unrivaled. I was envious of that.”

When asked about how it feels to participate in a FIFA event at home, they both agreed that it is an honor as well as a great opportunity for the Korean team to excel, as they did in 2002.

And they also hope the young players won’t stress over the criticism for poor goal decisiveness, saying it is the oldest cliche in the world of football. Instead, the two star footballers emphasized teamwork in creating chances.

Ahn and Park agree that while players often get injured, what’s important is how they cope after getting hurt. “For me it was more of a mental factor that bothered me,” added Ahn. “I was often worried that I might not be able to play as well as before once I recovered. The deal breaker for me was psychological therapy.”

“Players, especially when they are young, often rush their rehab procedure,” according to Park “They try to return to the pitch even if they are not fully recovered. However, this could shorten their career. When injured, the best choice is to undergo the entire rehab process.”