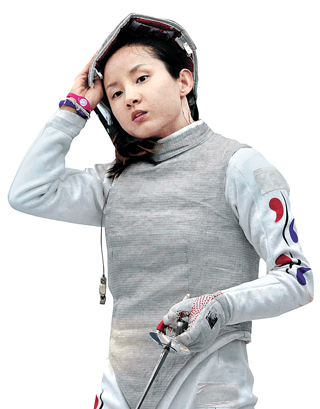 After years of struggles against criticisms about her size, and the physical toll incurred by injuries and child-bearing, Nam Hyun-hee made history to become the first fencer in Korea to participate in four different summer games in a single career.

At the Taeneung Training Center, located in the northeastern part of Seoul, there is a sign that counts down the days for the upcoming summer games. Only two months ago, Nam thought that the sign bore no meaning for her, as she hadn’t the faintest idea to go to the summer games again this year. Now, for her, it holds all the meaning in the world.

The 35-year-old captured a bronze during the 2016 Fencing Grand Prix Foil in Havana, Cuba on April 13, automatically placing herself in the Korean Olympics fencing squad. “I can read the sign more clearly now for some reason,” Nam said, indicating her state of mind when her participation in the Rio Olympics was still dubious. “Nam showed an uncanny level of concentration,” said Choi Myung-jin, the national team coach for foils.

Now that she will get on the plane to travel to Rio this summer, Nam will take a shot at her first Olympics gold. Although she has a silver from the 2008 Beijing Olympics and a bronze from the 2012 London Olympics, she has yet to stand at the top of the podium at the global sports tournament.

Nam has been short most of her life, and it’s been a subject of some sensitivity. Even as an adult, she stands only at 5 foot 2. But she has always been fast and agile compared to her peers. In middle school, she joined the track and field team but quickly grew sick of all the running the coach made her to do. Around then, she watched the fencing team practice session and was mesmerized by it all, especially the smart white uniform. Like a magnet attracts steel, she took to her foil.

After wearing the Korean flag on her uniform for the first time in 1999, she’s never wasted a single day since, largely owing to her competitive personality. “She was more stubborn and tenacious when she was in high school,” said Lee Jung-un, Nam’s coach in high school. Lee isn’t wrong. Sleep eluded Nam when she lost a match. “Nam kept a training diary and would even sketch out the match in the notebook to study,” according to Lee.

Nam is known for her agility and quick feet. Moving around like a dancer, she shuffles her feet before lunging at her opponent. During the 16 years of her career as a national team fencer, no one, not even European fencers who are at least a foot taller than her, could intimidate Nam. In a sport where touches are scored only when contact it made by the tip, Nam’s quick feet were her greatest weapons. However, the cartilage in her right knee is so worn out now that Nam is unable to walk straight without taping it. “I cannot even remember when was the last time I wore heels,” said Nam.

Before the 2011 London Olympics, Nam married cyclist Kong Hyo-suk. After bringing home a bronze medal from London, she gave birth to her daughter. After that, no one thought Nam would return to the piste, or fencing area, but retirement was not an option for Nam. Two months later, she was back on her feet, and it only took her another two months before rejoining the national fencing team.

The 2014 Incheon Asian Games were the comeback stage for Nam, where she won a gold and a bronze.

With the Olympics fast approaching, Nam at first seemed to be in no fighting shape. Her legs don’t work as they used to, and consequently, she has lost her trademark speed. More importantly, she thought she’s devoid of motivation.

“In the past, right after the Olympics, I would be getting ready for the next one,” recalled Nam. “But after delivering my daughter and my knee injury, I thought it would be difficult to see myself in the piste again in summer.” However, as her coach Lee said, Nam’s stubbornness and tenacity wouldn’t leave Nam alone. “It’s still a fight against taller and bigger fencers,” Nam added. “I am no longer as agile as I used to be. But now that I don’t move around as much on the piste, I am calmer, analyzing my opponents’ movements more precisely and decide on my next move accordingly.” Her new method works well for Nam, who’s placed third in the Grand Prix this year and won the Asian championships for the 13th time. “Physically, I have never felt better,” Nam said.

Obviously, Nam’s a fighter. She’s been battling against biases through out her life and overcame them. Her height, once deemed a weakness, became her greatest weapon, and although no one thought it possible for an athlete to continue her career after childbirth, she’s proven everyone wrong. “I’ve heard some people criticizing me, saying that I have robbed the national team of a spot for younger fencers. But I think it’s only right that I should step away if someone better comes along.”

Nam eventually wants to see a paradigm shift in sports in Korea and show others that there is no mountain too high to climb through her career. “I want others to see that an athlete does not have to sever herself from the sport after things like childbirth,” Nam said.