Bringing calligraphy into the modern era

Bringing calligraphy into the modern era 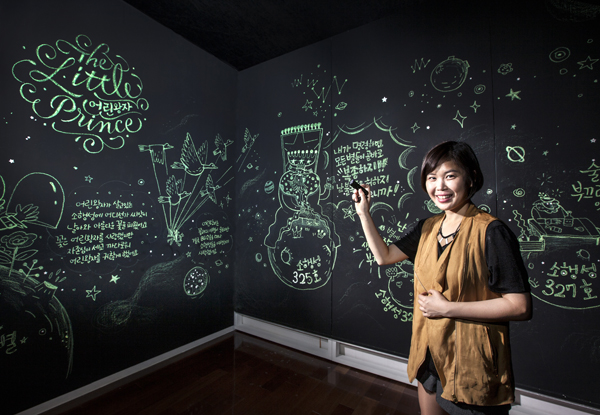 Rather, they are more used to typing out the words using keyboards, since the digital era has changed people’s habits. That is, with the rapid development of electronic devices, people can use only two thumbs to write whatever they want to say.

However, gradually the trend is moving back toward embracing the style of analogue. Similar to the fashion trend that has gone retro, handwriting has been gaining attention as well.

“When I was young, I spent the whole day at an academy that taught calligraphy of the old Chinese characters,” Kim said. “I made my own book of ‘Thousand Character Classic’ with my own handwriting.”

“That showed how much I loved to write by hand,” Kim added. “When I worked at a calligraphy company, I came across English calligraphy, which I fell in love with. So I just went to Canada impulsively with the passion to learn.” 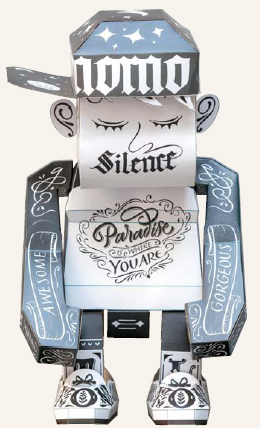 Kim’s calligraphy for a paper toy.

After studying in Canada, she has participated in presentations and lectures abroad in places such as Italy, France and the United States in order to expand her knowledge in the field.

As English and Korean calligraphy have large differences, with different styles and using different brushes and pen points, Kim tried to teach herself, but it was not an easy task. Kim had a lack of experience in writing letters using ink. To make matters worse, there was no teacher in Korea at the time to teach her proper English calligraphy.

Thus, she decided to go to Canada to master English calligraphy. There she met Martin Jackson, a famous calligrapher, and studied for a year. He found Kim’s aspiration to learn the art touching and did not accept any tuition fee from Kim.

In 2011, she came back to Korea and started to work as a lettering artist specializing in the English alphabet.

The artist is continuing her study of calligraphy to this day. She goes abroad once a year to participate in calligraphy lecture programs. In particular, she has visited the United States to study under the calligraphers John Stevens, Sheila Waters, Julian Waters, Gaynor Goffe and Sally-Mae Joseph. Through their lectures, she has been able to further develop her skills. For example, Goffe helped her to organize all the different styles and designs of English letters, and Joseph inspired her to think out of the box.

Kim is now putting her ability to use across Korea, working on diverse forums, festivals and projects. At the 2015 Slow Food Asia Pacific Festival, held at Kintex in Goyang, Gyeonggi, the phrase “Cool Farmers and Real Tastes” gained a lot of attention, as it was written on a mural there. That was the moment that Kim’s art became widely recognized. In her illustration, she manifested the beauty of slowness using the chalk as the main material.

Kim worked on her latest collaboration projects with Pecotoy, a company making paper toys, and the Kanu premium coffee brand from Maxim. For these two projects, she tried to express the unique characteristics of the brands. Thus, it is not just a matter of forming the letters, but of considering the details of the characters of the brands.

In addition, Kim has released books for people who want to learn calligraphy.

In the present era, there are not many opportunities for the younger generation to write by hand due to computers and smartphones. In this setting, handwriting has become a special experience. Maybe this is why calligraphy has been gaining public attention lately.

The lettering designer’s goal is to teach Korean calligraphy to foreigners who find hangul attractive. She loves the touch of the brush and the curve of Korean characters.

“Hangul is so beautiful that many foreigners fancy learning it,” Kim said.

Thus, she has set another goal to spread the beauty of hangul worldwide by further developing her own letter designs: “TeaAe Kongal” and “TeaAe Euiji.”

Left: An artwork Kim made in collaboration with her father, a lacquer craftsman. Center: A calligraphy artwork with the image of a tiger, alluding to the jeopardy of the endangered species. Right: Kim makes letters one by one at her studio located in Yangpyeong-dong, western Seoul.