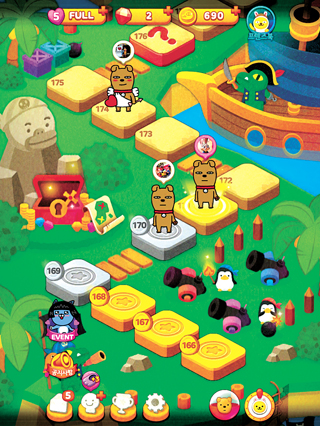 With NHN’s patented application programming interface for mobile games, a list of the user’s friends who play the game and their ranking are automatically shown. [SEO JI-EUN]

The lawsuit follows over a month of negotiations between the rivals, who run the nation’s most popular portal sites and mobile messenger apps. NHN claims Kakao refused to accept its demand to pay a fair amount for using the technology.

“Even though we have lodged the suit, there is still room for further negotiation [with Kakao],” said a spokesman from NHN.

He said the suit could take as long as two to three years.

Kakao has yet to comment on the matter, saying the suit has yet to reach its offices.

The interface enables a user to link his or her mobile game account with a mobile messenger such as KakaoTalk and LINE or a social media network such as Facebook. The list of friends who play the game and their ranking are automatically shown, and the game-playing experience becomes more interactive.

NHN Entertainment filed an application for the patent in June 2011, and the patent was officially registered in Korea in August 2014. It is valid through 2031. Registration in Japan followed in 2015 and in the United States in 2016.

Under industry convention, patent fees can be as high as 10 percent of the revenue from the service using the patent. Given Kakao posted around 200 billion won ($170 million) in annual revenue from its mobile game service last year, it may have to cough up as much as 20 billion won to NHN.

The company refused to elaborate on the compensation size, only saying it follows industry convention.

But Kakao may be an early and small target. If the suit works for NHN, it plans to demand Facebook and even its Japanese affiliate mobile messenger app LINE pay compensation.

“We will take an advantageous position when it comes to claiming patent rights in the face of global companies,” the NHN spokesman said.

K-Innovation was established last November with the goal of turning a profit out of patents that NHN Entertainment owns, which total around 711 worldwide.