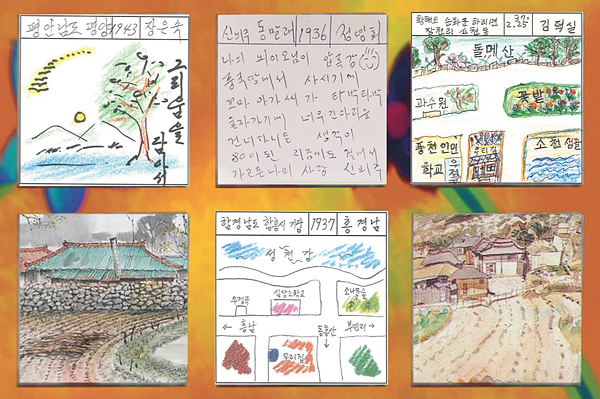 Drawings of hometowns in North Korea by misplaced Koreans who now live overseas. A total of 192 Korean immigrants, who are from the North, visited South Korea to partake in “The North in My Dream” project at the invitation of the Committee for the Five Northern Korea Provinces. [INSTITUTE FOR UNIFICATION EDUCATION]

A vast and mesmerizing work of art composed of individual drawings by displaced Koreans will be on display near the border at the Mount Odu Unification Observatory on Aug. 15 under the title “The North in My Dream,” a project intended to symbolize hope for reunification and a longing to return to one’s hometown.

The JoongAng Ilbo and the Institute for Unification Education launched the project today, through which over 15,000 drawings by Koreans who left behind their homes in North Korea will be transformed into a single work of art.

Under the three-month project, the state-run institute will collect 15,000 drawings, each 7.6 centimeters (3 inches) in length and width, of hometowns by displaced Koreans, which will be made into a mosaic work and placed on a three-meter (9.8-foot) high and 12-meter wide wall at the unification observatory.

Those who wish to partake can do so by submitting drawings of their hometowns as they remember them today. The Institute for the Unification Education, which is run under the Unification Ministry, will send manuals to every one of the 69,416 registered separated relatives, informing them of the project.

Those who wish to submit their works can make a drawing on a palm-size postcard sent to them by the institute and mail them back or submit them on site.

Collected drawing and letters will be transformed into art by exhibition artist Kang Ik-joong, who will make use of the 15,000 collected works to create a single piece that will be unveiled on Aug. 15, Liberation Day. “I will imbue these works with a spirit of faith in the dream that unification will one day be realized,” said Kang. 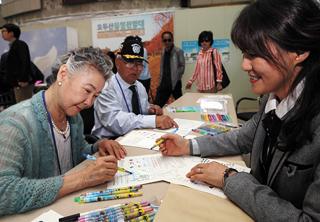 Jang Eun-sook, from Pyongyang, recalls her hometown through a drawing during her visit to the Mount Odu Unification Observatory last Thursday. She submits her drawing to “The North in My Dream” campaign, jointly organized by the JoongAng Ilbo and the Institute for Unification Education. [KANG JUNG-HYUN]

Those who wish to partake can also submit their drawings to branches of KEB Hana Bank, the sponsor of the project. Participants can also submit letters to their families left behind in the North instead of drawings.

The Mount Odu Unification Observatory, an hour drive from Seoul to the southern side of the border, is known as a holy place for separated families since its opening in 1992, as it is the northernmost point from which they can catch a glimpse into their former homeland. About 140,000 foreign tourists visit the site every year. Of the 140,000, 70 percent of them are Chinese.

The observatory exhibition of drawings will bear resemblance to the East Side Gallery, which consists of over 100 paintings from all over the world drawn on the east side of the Berlin Wall in celebration of the unification between West and East Germany and in remembrance of the joy generated by a new-born peace.

Cho Ok-sim, who visited Korea from Argentina where she had emigrated, visited the Odu observatory last Thursday. Cho, 85, is from North Hwanghae Province in the North. “My heart is beating so fast now,” said Cho, who came to Korea for the first time in 20 years, adding that she is both excited and sad to face her hometown once again, even if only in art. Cho visited the Mount Odu observatory in a group tour along with 191 other members, all of whom were born in North Korea and now live overseas. The 192 Korean immigrants visited Korea to take part in the project.

“I don’t recall my hometown in detail. But to us, our hometowns are like drawings engraved in our hearts,” said Jang Eun-sook, 73, who is from Pyongyang and now lives in Dallas.

Moon Seok-hee, 74, said she left her hometown of Kaesong at 9, and although more than 60 years have passed, Moon drew her neighborhood in such exquisite detail that it was as if she had visited it only days ago. “My home was right next to Kaesong’s south gate,” said Moon with tears in her eyes.

“Through this project, we will strive to raise public awareness about the importance of unification and will continue unification-related projects,” said Lee Keum-soon, president of the unification education institute.