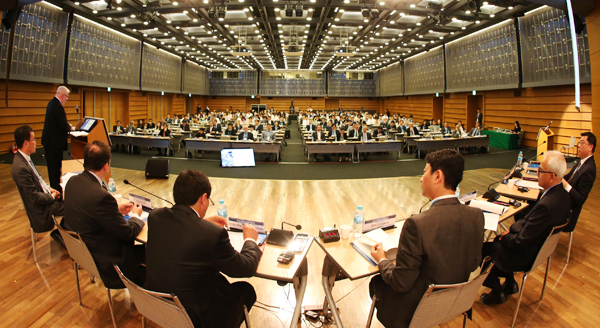 Both local and foreign trade experts discuss ways to improve trade systems around the world at the Seoul International Forum on Trade Remedies 2016, which was held at Korea Chamber of Commerce & Industry’s headquarters on Thursday. [MINISTRY OF TRADE, INDUSTRY AND ENERGY]

Trade experts from across the world called on Thursday for a fair and transparent business environment and warned against rising protectionism as countries struggle with the global economic slowdown.

At the Seoul International Forum on Trade Remedies, President Park Geun-hye emphasized Korea will remain a staunch supporter of free and open trade.

In a video message to the forum, she said that the temptation for nontariff barriers and unfair trade has risen across the world due to worldwide financial difficulties.

“Countries have to enhance cooperation instead of raising protectionist barriers,” Lee Kwan-sup, first vice minister of Trade, Industry and Energy said in his opening remarks at the forum which was held at Korea Chamber of Commerce & Industry’s headquarters.

Hong Soon-jick, chairman of Korea Trade Commission, said, “I worry about some of the countries enhancing anti-dumping measures in order to protect their local industries, mainly that of steel. I believe worldwide regulation and monitoring agencies need to work together in order to improve global trade.”

Hong said he thought highly of both bilateral and multilateral trade agreements since they help members to trade with each other more freely and transparently.

Hong Suk-woo, a former minister of knowledge economy, expressed his concerns about protectionism. “Policies to protect domestic markets in difficult economic situations, by taking protectionist measures may help obtain political support by temporarily boosting local industries, but these are nothing but stopgap measures,” he said.

“There exists a possibility that one country’s small trade protection measures may trigger other countries’ retaliatory measures, which, in turn, may produce a domino effect resulting in the prevalence of protectionism. This could lead to a possible repeat of the case where the United States caused the collapse of the world trade order when it passed the Smoot-Hawley Tariff Act in the 1930 [during the Great Depression].”

Prior to the global financial crisis in 2008, global trade grew at an annual average rate of around 7 percent, serving as a driving force for economic growth. However, it has fallen significantly since 2012, recently marking 2 to 3 percent growth, which is at best similar to or lower than the global economic growth rate for the same period.

According to the World Trade Organization (WTO), the global trade growth rate recorded minus 11.8 percent in 2015, a drop from 0.3 percent the previous year.

Other WTO data shows that more countries are taking protectionist measures in the hope of helping their own economy.

In 2014, the number of investigations initiated for trade remedy measures around the world totaled 304. It dropped from the previous year, but the figure is still high compared to the level during the 2008 global financial crisis, when it recorded 244. Recently, investigations initiated by developing countries accounted for more than half of the total investigations made. The number includes cases for anti-dumping duties, safeguards and countervailing duties.

The total number of investigations, however, is still lower than 1999, when a financial crisis hit Asia. It recorded 415 back then, according to the WTO.

Former minister Hong suggested countries should implement international agreements to curb and freeze protectionism and to operate their trade remedy systems in a fairer and more transparent manner to improve predictability.

“The global trade remedy system will significantly develop only when individual countries share a variety of knowledge, experience and information related to it on the basis of mutual trust,” Hong said. “This will, I believe, lead to trade expansion, which will, in turn, make a significant contribution to global economic development.”

Koreans and also a large number of foreign experts and decision-makers from some 15 countries - the European Union and the WTO, including F. Scott Kieff, commissioner of the U.S. International Trade Commission and Canadian International Trade Tribunal’s acting Chairperson Jean Bedard, Dale Seymour, Australian Anti-Dumping Commissioner - attended the forum and took turns sharing their views on the trade issues.

The forum was co-hosted by the Ministry of Trade, Industry and Energy, and the Korea Trade Commission. Korea International Trade Association sponsored this year’s event.

First launched in 2001, the forum is an annual international event providing a venue for executives and higher-level officials from trade remedy authorities and leading experts from around the world to have in-depth discussion on the latest trends and issues.