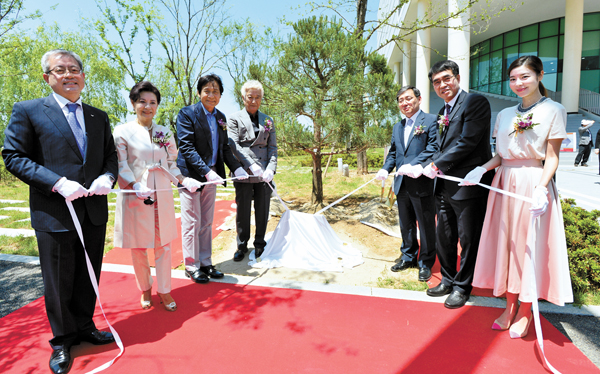 Paju Conservation Center opens on Thursday in Paju, Gyeonggi, installed with the latest technology to restore and preserve films made in Korea. Under the helm of the Korean Film Archive (KOFA), it aims to make up for a lack of storage space for Korea’s classic films as well as use cutting-edge equipment to restore and reproduce images. From left, Paju Mayor Lee Jae-hong; actors Moon Hee, Ahn Sung-ki and Shin Sung-il; Deputy Minister of the Cultural Content Industry Office at the Ministry of Culture, Sports and Tourism Yoon Tae-yong; KOFA Director Ryu Jae-lim; and actress Kim Gyu-ri plant a commemorative tree during the opening ceremony Thursday at the center. [NEWSIS]