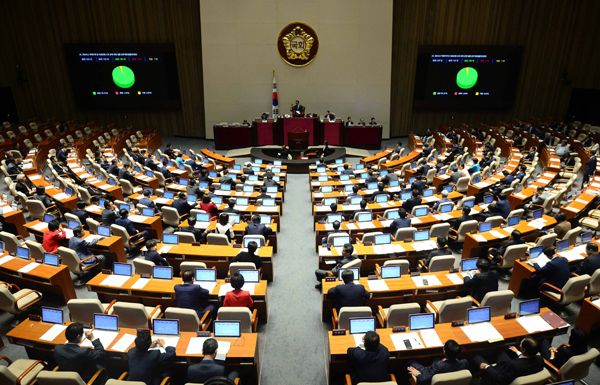 Lawmakers held the final plenary session of the 19th National Assembly on Thursday to pass dozens of uncontested bills - while more than 10,000 bills considered more controversial went down the drain without reviews or votes.

Based on Sunday’s agreement among the ruling Saenuri Party and the opposition Minjoo Party of Korea and People’s Party, a voting session opened in the morning to pass 135 bills.

The three parties agreed to pass uncontested bills but not a series of economic and labor bills pushed by the Park Geun-hye administration or the opposition’s request to extend the mandate of a committee investigating the 2014 Sewol ferry’s sinking.

Since the 19th National Assembly started its four-year term in 2012, 18,735 bills and motions were submitted in total and voting took place on 8,461 items as of Wednesday. On top of that were the 135 bills voted through on Thursday.

It was the last voting session for the assembly before its term ends May 29.

Among the bills that passed the legislature Thursday was the so-called Shin Hae-chul Law, a revision to the Act on Remedies for Injuries from Medical Malpractice and Mediation on Medical Disputes.

The bill, submitted by Rep. Oh Jae-sae of the Minjoo Party in March 2014, earned its nickname following the death of Shin, a Korean rock icon who rose to mega-stardom in the 1990s, due to medical malpractice later that year.

Under current law, people who think they are victims of medical malpractice can ask for help from the Korea Medical Dispute Mediation and Arbitration Agency, and then the agency begins mediation. But doctors are able to refuse mediation. Under the Shin Hae-chul Law, mediation will automatically begin even without the doctor’s consent.

Of the 192 lawmakers who attended the voting, 183 supported it, two opposed and seven abstained.

A revision to the National Assembly Act was also approved Thursday with cooperation of some lawmakers of the ruling Saenuri Party. According to the bill, the National Assembly will be able to open an extra voting session in August every year and standing committee meetings during the third weeks of March and May, when the legislature is not in session.

Since the 2014 sinking of the Sewol ferry, the National Assembly opened a session every month, but the change will allow the lawmakers to open meetings through the year.

The bill also eased a requirement to hold a hearing at a standing committee. When more than one third of the lawmakers on the committee requests, or when the committee approves the need, a hearing can take place.

Although a hearing at a standing committee was possible in the past, a call for a hearing was often rejected by the majority party.

The bill was based on a proposal by National Assembly Speaker Chung Ui-hwa. Although it was approved by the House Steering Committee and the Legislation and Judiciary Committee, the Saenuri Party has opposed it, because they said the eased requirement for holding a hearing will give the legislature excessive control over the administration.

But some Saenuri lawmakers who are not loyalists of President Park Geun-hye as well as independent lawmakers who left the Saenuri before the April general election supported the change.

Of the 222 lawmakers who participated in the voting, 117 supported it, 79 opposed it and 26 abstained.

The 19th National Assembly was the least productive legislature in Korean history. (Even after Thursday’s session, it) voted on less than 46 percent of the bills submitted, the lowest in history.

It is also responsible for the highest number of bills to go down the drain without proper reviews or votes. During the 18th National Assembly, 7,220 bills were discarded without voting and in the 17th National Assembly 3,575 bills.

Lawmakers were blase to the end. Thursday’s voting session was scheduled to open at 10 a.m., but it started 26 minutes later to meet a quorum. The Saenuri Party did not even hold a meeting to explain the bills and the party’s stances to its lawmakers.