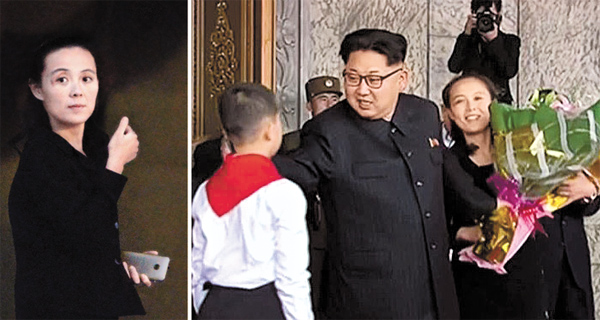 Left: Kim Yo-jong appeared, holding a cell phone, on May 10 at the 7th Congress of North Korea’s Workers’ Party. Right: Kim Yo-jong, right, takes a flower bouquet from her brother Kim Jong-un, left, the North Korean leader, at the celebration for the congress. [JIJI, RODONG SINMUN]

Kim Yo-jong, the younger sister of North Korean leader Kim Jong-un and a central committee member of the Workers’ Party of Korea (WPK), is not married, a high-level North Korean official-turned-defector said.

The Voice of America (VOA) reported Thursday that the 29-year-old sister Kim has yet to tie the knot, citing its interview with the anonymous defector, whom it reported had defected to the South last year with his father, also a senior member of the North Korean government.

A Unification Ministry official said the government wouldn’t confirm the veracity of the report.

The VOA’s report on Kim Yo-jong’s single life came after many reports by South Korean media that she was married to the son of Choe Ryong-hae, who returned to the power circle during the recent seventh congress with his entry into the five-member presidium of the political bureau of the WPK’s central committee.

The defector, who reportedly had worked for the North’s coal export business with China, said Choe’s son had actually died in a car accident in January 2013.

Jang Song-thaek, who was executed in late 2013 by his nephew Jong-un, reportedly formed a special matchmaking candidate team for his niece in September 2012 comprising roughly 30 North Korean males who had graduated from or were enrolled as graduate students at the prestigious Kim Il Sung University. In order to make the list, one had to have served in the army, been a member of the party, be physically attractive, be at least 175 centimeters (5 foot 10) in height. Apparently, if the defector’s account is accurate, Jang’s special plan, which reportedly lasted six months, didn’t work out too well for Yo-jong.

The defector also said students at Kim Il Sung University had to step aside to make way for Yo-jong in the hallway, and that no one was allowed to get in the same elevator with her except her classmates.

There have been many speculations over the sister Kim’s marital status by South Korean media. The sister has occasionally been seen in news footage accompanying her brother during inspections. She was last seen standing next to Kim Jong-un during a mass parade held on May 10 commemorating the 7th congress, which was held for the first time in 36 years this month.