Saenuri plans meeting to save party from ruin

Saenuri plans meeting to save party from ruin 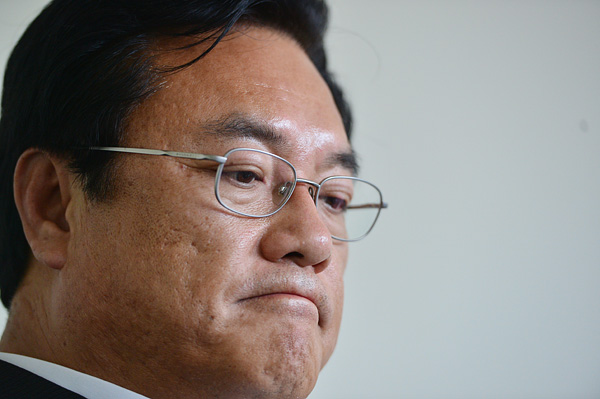 The new floor leader of the Saenuri Party said Thursday that he will meet with senior politicians today to save the party from breaking up as a result of a vicious factional fight.

Chung Jin-suk, the floor leader of the Saenuri Party, said he will resume his work with the party and legislature. He said meetings of the floor leadership and senior lawmakers will take place today to discuss the civil war between loyalists of President Park Geun-hye and non-loyalists.

After its humiliating defeat in the April general election, the party elected Chung as the new floor leader and decided to make him an interim chairman to oversee the party for the next few months. Chung decided that an innovation committee will be created and chaired by a reformist in order to reinvent the party.

The plan, however, was overthrown by Park loyalists on Tuesday, who also openly discussed the possibility of breaking up the party and urged their adversaries to leave.

Chung, who pushed forward the reform plan, went to his district of Gongju, South Chungcheong, on Wednesday. After a day of contemplation, Chung returned to Seoul.

Chung said he will meet with senior politicians who won more than four terms today. “Listening to their opinions is the first step,” he said.

“I belong to no faction,” he continued. “And I am not a politician with many followers. I was elected as the floor leader to run the party with a neutral approach and to make the party accept the public desire for cooperative politics. It is not a matter of fighting and winning.”

“I believe President Park shares the same idea,” Chung said. “During her recent meeting with news editors, Park discouraged factionalism. She said we must win the public trust and do politics with beliefs.”

Rep. Suh Chung-won, known as the godfather of the Park loyalists, said he hopes the senior members’ conference will find a resolution. Suh scored his eighth victory in the April election, becoming the longest-serving lawmaker of the Saenuri Party.

The tension between the two factions appeared to subside slightly on Thursday. Although the situation was still serious, many Saenuri lawmakers started saying that the conservative party, which has 28 years of history, will not easily break up.

Lee Jong-koo, who scored his third victory in the April election, said the factional strife was fiercest during the presidential primary in 2007, but the party remained intact. At the time, President Park lost the candidacy to her predecessor Lee Myung-bak. During the primary, Park loyalists called Lee a criminal with 14 records, while Lee supporters called Park a dictator’s daughter.

“Our party didn’t break up in 2007,” said Lee, who witnessed the primary from a neutral position. “Moreover, Park loyalists will weaken further toward the end of her term. The conflict will soon be resolved.”

Rep. Choung Byoung-gug said the conservatives have no urge to create a new party and that “They prefer remodeling the existing one.”

Another senior lawmaker said splitting with the Saenuri Party to launch a new group requires a strong presidential candidate. “But none of the two factions have one,” he noted. “Both sides know that creating a splinter party is risky business, so it won’t be easy.”

Saenuri lawmakers said the president still has the key. If the Park loyalists continue to undermine Chung in order to protect the president and their factional interests, finding an amicable ending could be difficult. “The one who has tied a knot must be the one to untie it,” said Rep. Kim Tae-heum, a Park loyalist. “Chung should untie the knot.”