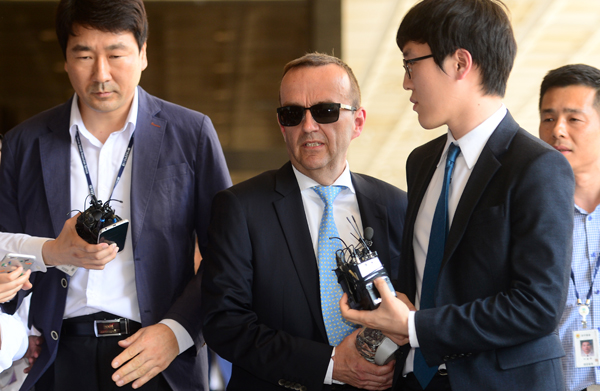 Ulrich Hosterbach, the German finance director of Reckitt Benckiser Korea, whose Oxy line of sterilizers allegedly killed scores, walks into the Seoul Central District Prosecutors’ Office on Thursday, the first foreign employee of the company to be summoned in a humidifier sterilizer probe. [NEWSIS]

Prosecutors summoned Ulrich Hosterbach, the German finance director of Reckitt Benckiser Korea, on Thursday, the first foreign executive of the company to be questioned about the humidifier sterilizer scandal. Hosterbach has been the finance director of the British-based company since 2010.

Prosecutors suspect that Hosterbach was involved in allegedly paying bribes to professors at Seoul National University and Hoseo University for favorable chemical tests and reports.

After the Korea Centers for Disease Control and Prevention first linked mysterious pulmonary illnesses and deaths to humidifier sterilizers in 2011, Reckitt Benckiser Korea requested institutes including the Seoul National University and Hoseo University to conduct toxicity tests on its Oxy brand of sterilizer.

The company paid a total of some 700 to 800 million won ($588,237 to $672,271) to four to five organizations for the reports, according to prosecutors. The company allegedly paid an additional 12 million won to a Seoul National University professor and 24 million won to a Hoseo University professor heading the toxicity tests. The professors told prosecutors that they did not report the payments to the universities’ research foundations. Prosecutors suspect these to be bribes paid to the professors for favorable test results and that Hosterbach was involved.

Prosecutors also discovered an email exchange between the company and the Seoul National University professor in October 2011, in which the Oxy manufacturer asked the professor to prove through the toxicity test the harmlessness of the Oxy sterilizer and that the victims’ pulmonary illnesses stemmed from other causes. The email also included a contract agreement from the company to pay the professor 4 million won per month for three months.

The professors have argued that these personal bank account transfers were consulting fees but prosecutors suspect them to be bribes since they were paid before the professors released the test results.

Hosterbach walked into the Seoul Central District Prosecutors’ Office on Thursday wearing sunglasses and did not answer reporters’ requests for a comment to the victims. He is currently banned from leaving Korea.

The Oxy line of humidifier sterilizers by Reckitt Benckiser Korea is reported to have sickened 177, of which 70 died, according to prosecutors.

More foreign employees and executives of the company are likely to be summoned including John Lee, former CEO of the company from 2005 to 2010 and current CEO of Google Korea. Prosecutors will be questioning Lee on whether he was aware of the toxicity of polyhexamethylene guanidine (PHMG), a compound used in Oxy sterilizers, when he was in charge of the company.

Gaurav Jain, another former CEO of the company, may also be summoned, though the procedures may be more complicated due to the fact that he is not in Korea. Prosecutors suspect Jain may have been involved in manipulating toxicity tests.

Shin Hyun-woo, CEO of the company from the 1990s to 2005, is being detained and faces charges of involuntary manslaughter and negligence. PHMG was used by the company from 2000, when Shin was CEO.