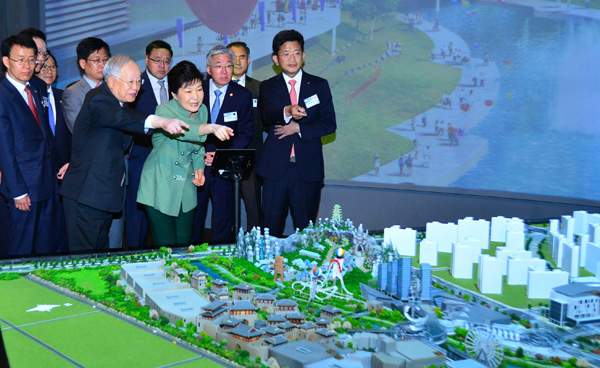 President Park Geun-hye listens to CJ Chairman Sohn Kyung-shik explain the K-Culture Valley project at its ground-breaking ceremony in Goyang, north of Seoul on Friday. A complex the size of 46 football stadiums will open in December next year. [NEWSIS]

CJ broke ground Friday on a gigantic complex devoted to Korean pop cultural content in Goyang, Gyeonggi, which is to be completed in December 2017.

“K-Culture Valley” will have a theme park, a 2,000-seat K-pop concert hall, a traditional Korean-style hotel with 400 rooms and a shopping mall on a 326,000-square-meter plot near Kintex - the size of 46 football stadiums combined.

The conglomerate, a leader in both the entertainment and food industries, announced at a ground-breaking ceremony that it will spend 1.4 trillion won ($1.2 billion) on the project, 40 percent more than its original budget.

“One of key growth engines of Korea will be the industrializing of Korean culture through creative content,” said President Park Geun-hye at the ceremony.

She cited the hugely popular Korean drama “Descendants of the Sun” as a successful example of Korean cultural content contributing to the national economy.

“The drama itself posted 10 billion won in export deals, but also led Korean businesses to ship a range of products featured in it - worth 1 trillion won,” Park said.

Meant to introduce 5,000 years of Korean history - from the period of the Three States (Samguk) to the Joseon Empire - the theme park will consist of six different zones.

Unlike ordinary theme parks that are equipped with rides, the six themed zones will make the most out of Korean dramas, films and music to allow visitors to experience Hallyu, or the Korean wave of pop culture, with the help of cutting-edge technologies such as holograms, augmented reality and virtual reality.

For instance, a tourist may become Admiral Yi Sun-shin and lead warships into the historic Battle of Myeongnyang against the Japanese navy through a 4-D video. That experience will be based on the popular 2014 historical epic “The Admiral: Roaring Currents.”

The ministry anticipates the valley will create 56,000 new jobs and 8.7 trillion won worth of economic impact in its first five years after its opening next year. Annual visitors are forecast at 5 million.

With an ambition to form a cultural ecosystem, the Ministry of Culture, Sports and Tourism has been launching a series of establishments since early last year.

The Hallyu-centered project began with the opening of the Culture Creative Convergence Center at the CJ E&M Sangamdong Center in western Seoul last April. The K-Culture Valley is set to round off the grand plan.