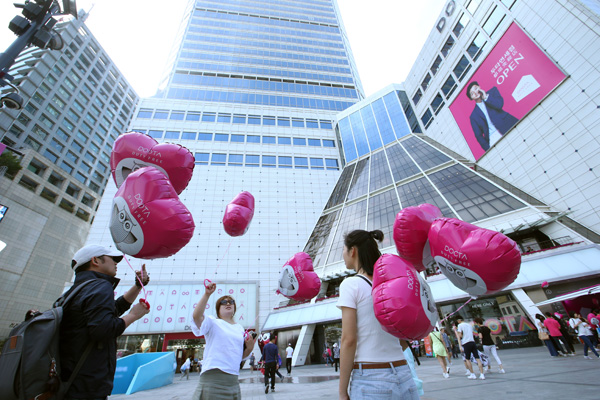 Workers of the Doota Duty Free Store in Doosan Tower give out balloons to shoppers on Friday to celebrate its opening. [PARK JONG-KEUN]

Doosan Group opened its new duty free shop in Dongdaemun, central Seoul on Friday, banking on the appeal of Korean pop culture to attract tourists, especially from China, as it faces stiff competition from Lotte, Shilla, Shinsegae and Galleria.

Doota Duty Free Store in Doosan Tower, a shopping mall run by the group, is the first tax exempt outlet in the fashion district in central Seoul, taking up nine floors of the mall building.

Instead of imported luxury designer labels, Doota is focused on domestic brands popular among K-pop fans.

Absent among some 500 brands are luxury retailers Chanel, Louis Vuitton, Hermes and Prada.

Instead, Doosan devoted an entire floor to up-and-coming Korean designers.

The 11th floor is themed around a set of the hit drama “The Descendants of the Sun”. Doosan also selected actor Song Joong-ki, a lead male character in the drama, as the main model for the new store.

“The duty free shop might appeal to the K-Pop fans,” said Kim Hye-rin, a 29-year-old who visited the shop. “But for local shoppers, it’s not that attractive because there are not many brands that are often sought by shoppers.”

Some industry sources also warned that the duty free shop needs to come up with an alternative strategy in case the popularity of K-drama and movies fades.

Acknowledging the market condition, Lee Cheon-woo, vice president of Doosan, said that the group might need to revise target sales.

Doota also displayed cheaper food items such as ramen products by Nongshim and health supplements on the 17th floor.

The outlet will operate until 2 a.m. as the district is most active in night.

Of the nine floors, only seven floors were unveiled. Two floors are set to open in August for the grand opening.

“In the meantime, we will focus on stabilizing the duty-free business and continue to attract more brands into the store to offer a wider range of products and services to customers,” said an official of Doota Duty Free.

“We will do our best to make Doota Duty Free Store the landmark of Dongdaemun when we have a grand opening in the second half of this year.”