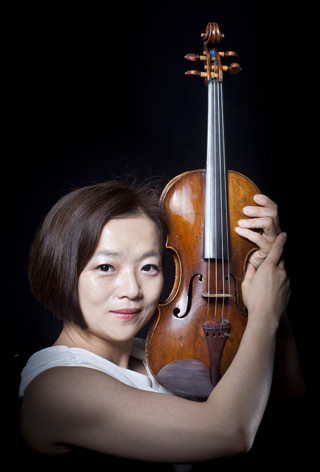 Lee Sang-hee, a Korean violinist, has been holding annual concerts for the past 12 years, funding them out of her own pocket, and has donated all ticket revenue to the International Vaccine Institute (IVI). [KWON HYUK-JAE]

Some say that for true artists, art is an inoculation against death, but for Lee Sang-hee, a Korean violinist, playing music is equivalent to receiving a life-saving vaccination.

Lee has held annual concerts for the past 12 years, funding them out of her own pocket, and has donated all ticket revenue to the International Vaccine Institute (IVI).

The IVI is a non-profit international organization that produces vaccines to prevent epidemic diseases like cholera, and supply them to developing nations at an affordable price. With just 10,000 won ($8.41 International Vaccine Institute), three children in the developing world can receive a vaccination.

Since 2005, Lee has donated a cumulative 88 million won by holding solo violin concerts.

She now hopes to break the 100 million won mark after completing this year’s concert, which is slated for August 27 at Youngsan Art Hall in Yeouido, western Seoul. If successful, this will be tantamount to donating vaccines to 30,000 children over the past 12 years.

“I would like to raise the audience’s awareness regarding how crucial vaccines are to saving children’s lives,” Lee said in an interview last Friday with the JoongAng Ilbo, “and then hope to send the money to the children in developing world. I first decided to begin the charity concert after joining a concert in 2004, which was held to support the IVI, and listened to the stories of the sick children, who suffer from epidemic diseases.”

Lee is currently teaching at the Chung-Ang University Graduate School, Sangmyung University and Sunhwa Arts School, where she instructs middle and high school students. Performing the role of elite violinist for most of her life, she graduated from Sunhwa middle and high school and was a top graduate of the Conservatoire National Superieur de Musique et de Danse de Paris. Married in 2006, she now is the mother of a three-year-old girl.

Lee started out her charity concerts playing solo, but began playing with her students as ensemble, called “Lee Sang-hee and Friends,” in 2007. She also formed an ensemble called “Unisong” with Korean students studying abroad and played for seven years to fund Korean adoptee support groups. Nowadays, she plays for charity recitals at different places ranging from hospitals and orphanages to prisons and single-mother shelters.

Her charitable nature stems from the generous life her parents lived.

“My father had a doll manufacturing business,” Lee says. “He took me to orphanages every Christmas and told me to give out dolls and play with the children. He always told me to use my talent to help the world.”

The group “Lee Sang-hee and Friends,” which first began as a quintet, has since grown into an ensemble of more than 30 members.

“Not only my students, but the family members and friends of my students, and then the friends of their friends, all joined the group because we don’t limit our membership by age or performance skill,” Lee explains, “what we want to deliver on stage is our heart.”

That is why the ensemble consists of members of all age groups, ranging from a ten-year-old, who plays the piano, to a seventy-year-old violinist. The types of instruments also became more diverse over time and now include a cello, viola and clarinet.

“All the ensemble members have empowered me so much,” she explains. “There was a middle schooler who donated his entire piggy bank with months’ worth of allowance to the group, and one college student decided to go to medical school to become a doctor at the IVI after playing in one of our charity recitals.”

At first, it wasn’t easy to sell tickets for 600 seats, but the group’s audience grew as it began playing well-known music like the pop song “Magic Castle” or “Twinkle Twinkle Little Star” along with classic music.

“As long as my fingers move as well as they do now,” Lee says, “I hope to keep playing in order to help people.”